Someone voted to close my question as a duplicate. I agreed, so I cast my close vote (I have enough reputation to vote to close).

A question is closed immediately when the asker agrees that it's a duplicate. So I expected this to happen.

But it didn't. This confused me — is this not a question I asked after all? No, it is. Maybe I need to reload the page? Nope, the question still isn't closed. Is the asker confirmation feature broken? Well, there's the “This question may already have an answer here” banner at the top. What if I click “That solved my problem!”? Ah, that does close the question.

It turns out that only clicking “That solved my problem!” instantly closes the question. Casting a close vote has a different effect, it's just an ordinary close vote.

Please make casting a close vote equivalent to clicking “That solved my problem!”.

I think this can be easily solved by changing the way option(s) are given to choose when OP decides to close his own question. After all, it's the OP who wants to close the question. I can understand keeping the question open so that enough voters can agree upon the reason for the close in case of the other users who flagged the question as a duplicate. But, here it's the OP who is actually casting a close vote.

But, if the system is designed (see Note at the bottom) to ask for the confirmation/reason for the close, then how about making a little change (as suggested below) in the dialog box when OP (as the system can detect or already knows the owner of the post) decides to close the question.

As per the OP quote:

"Someone voted to close my question as a duplicate. I agreed, so I cast my close vote (I have enough reputation to vote to close)".

Everything below only applies/valid for the above given facts.

Now, upon clicking the 'close' link under the question body, OP is given the options list as shown below: (Image taken from the Help Center > Privileges > Cast Close And Reopen Votes) 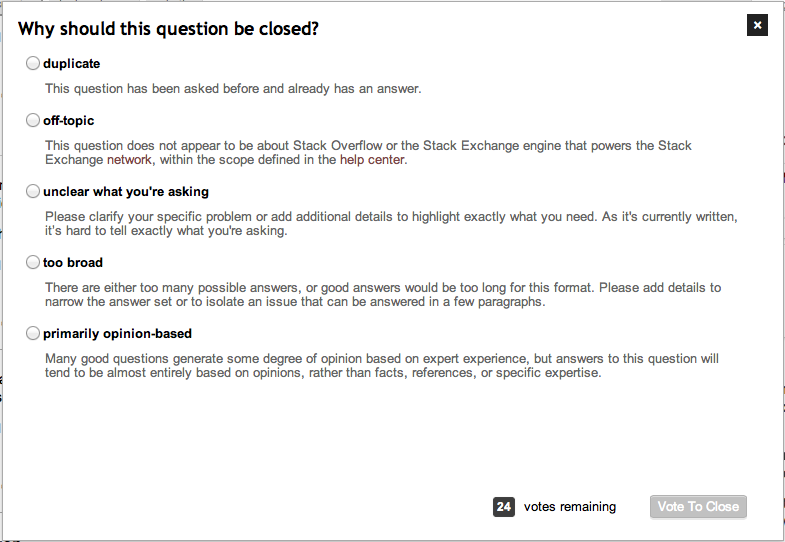 I would like to suggest the following change(s) to the above shown options window:

With the implementation of any of the above given suggestions, it is possible for the OP to close the question immediately without needing an additional confirmation shown afterwards in the banner at the top. It will surely avoid the confusion that OP witnessed here in this particular case. I'm sure there are few more other possible ways this can be implemented, but this is what I can think of. Please share your thoughts, ideas any suggestions.

I am assuming this belongs to the status-bydesign category. Also, the close vote will not work (status by design) if there's an open bounty on the question. It would be great if someone from SE team (or moderators) could share more details on this.

Not the answer you're looking for? Browse other questions tagged feature-request vote-to-close user-interface duplicate-questions .

3
Fast-track for marking own question as duplicate?
6
When the OP votes to close own question as a duplicate, immediately close the question
1
Why does my own dupe CV on my own question not immediately close it?
347
New UI encourages askers to confirm or dispute duplicate votes
9
The new closing window doesn't take into account if the question has an open bounty
5
Can my duplicate close vote be binding when I cast it on my own question
4
Question removed as spam, but title still remains in HTML, content visible elsewhere
4
Hot network questions onebox is invisible in chat
1
Comment author link not a link?

401
Add a way for moderators to cast a normal, non binding close/open vote
42
Autocomment when voting to close as duplicate
337
Distinguish close votes by reason
182
We should be able to close questions as duplicates of any question
421
Add an "I don't understand" option for review audits
256
Increase close vote weight for gold tag badge holders
187
Can we clarify to the OP that their question is not yet closed and the duplicates are only suggestions?
347
New UI encourages askers to confirm or dispute duplicate votes
336
Gold tag-badge holders and moderators can now edit duplicate links