We should always be able to include explanation with moderator flags, even if they're not a custom situation

I would like to have the ability to tell flag reviewers a little something in addition to the flag type. I know that different flag categories get treated differently, with VLQ going into the low quality queue, and so forth.

I think there are many cases where users end up submitting custom flags because it's not immediately obvious that something is Not An Answer, or that a comment is Obsolete, etc. This results in custom flags, causing the post to get treated differently than appropriate.

I think this is especially true:

There should still be a custom flag box, obviously, but I think it would be beneficial to be able to add that extra bit of communication while still sorting the flags properly. 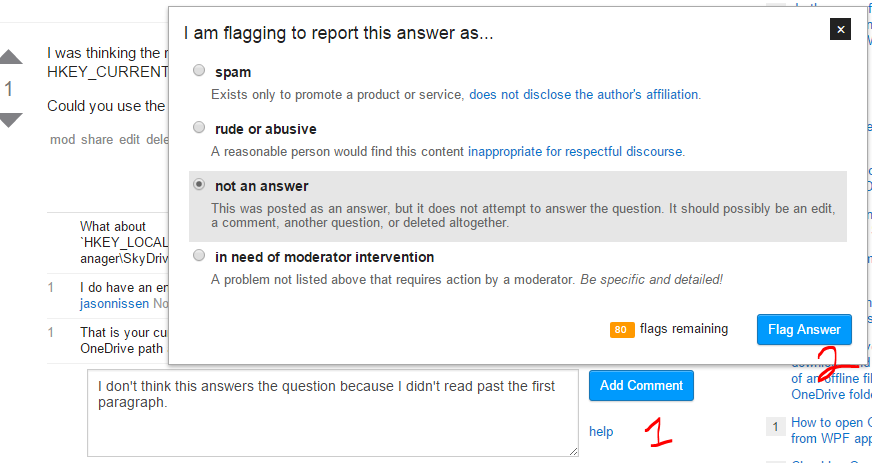 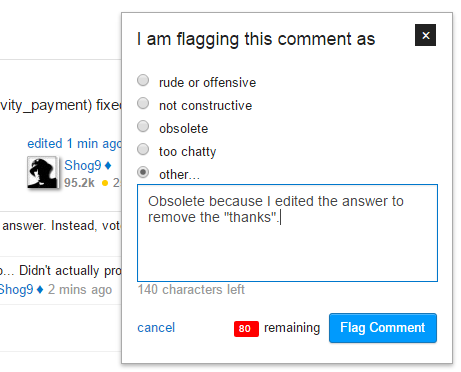 It's trivially easy to add information to the post itself or to the flag right now, if you really want to.

I gotta be honest; I don't find any of the downsides particularly compelling here. If your goal is to communicate (and it should be) then you have multiple avenues to do so when the canned flag reasons don't suffice.

OTOH, if your goal is to persuade, then don't hide behind a flag. Voice your concerns publicly, either in the comments or on meta, and let others agree or disagree as they will. Turning flags into some sort of star chamber where controversial or misunderstood posts get removed by shadowy figures with no public explanation isn't a good solution to anything.

Current UX for NAA and VLQ flags is long obsoleted by various changes in flagging process. Suggested feature offers an opportunity to correct this and bring it more in line with ideas laid out in Stack Overflow is not yet a vast wasteland: a history of moderator tooling.

To see why it is so, take a closer look at what SE team folks recommend in another answer:

leaving a comment... gives the author a chance to correct the problem in addition to offering mods and reviewers a better understanding of what you found concerning... And if you're wrong, someone might tell you that...

If you think of it, recommending to use comments is a fascinating advice. 3-4 years ago, it would be totally opposite to that, "Don't ever use comments to back up NAA / VLQ flags. If you feel a need to explain something, just use custom flag. Don't expect moderator to waste their time trying to find your comment and figure if it relates to flag or not."

The reason for such a striking change is that nowadays NAA / VLQ flags target totally different audience who are expected to handle them in a very different way.

This change of the audience led to the change of the role of comments. These are now welcome as sort of grease, helping reviewers - regular inexperienced users - better understand what's going on there and make the system work smoother and more reliably. (Compare that to the past, could you ever imagine self commenting to explain routine VLQ / NAA to a veteran moderator who was handling hundreds such flags a day?)

Okay, now that we learned that comments are assumed to integrate with VLQ/NAA flagging workflow, let's see if it makes sense to improve this integration.

For that, consider a pretty similar system that also involves communicating moderation details to multiple, possibly inexperienced reviewers. I am talking about close voting and more specifically, about free-form close reasons:

Closers can enter a free-form reason... Free-form reasons will be presented as comments, but the close dialogue will refer the reader to the comments for more info...

This is how it looks like for close vote reviewers: 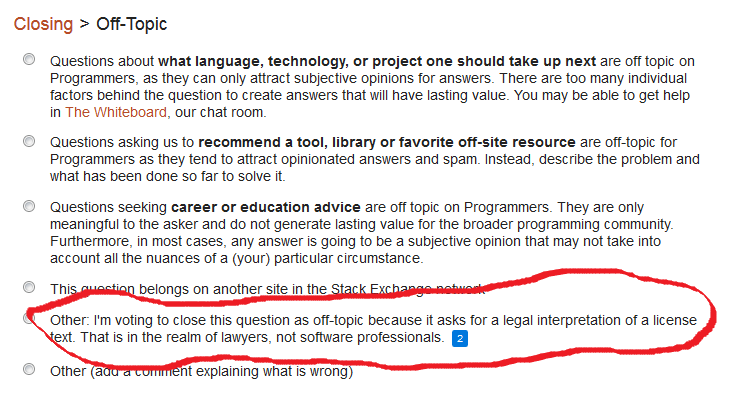 Same approach, and for the same reasons, could be (and I believe should be) implemented for flagging. (side note, since it involves comments, it makes sense to consider limiting an option to cast "commented flags" to users having a privilege to comment)

If flag messages get implemented as "connected comments", similar to free-form close reasons, one can even argue that this doesn't introduce changes to flagging process - because, as explained above, change already occurred long ago and is even openly endorsed by SE team.

From this perspective, such a feature can be considered simply as an improvement to already established workflow, making it smoother and less error prone.

I support this feature. While existing discussions claim that adding a comment to explain is enough, they are easily made obsolete par revision changes, and is not visible to the interface to provide the necessary context.

I appreciate why you're requesting this feature -- just yesterday, I flagged an comment with a custom flag to explain why it was obsolete, instead of just flagging it as obsolete.

However, I don't think that this is necessary -- for flags on posts (you mentioned VLQ and NAA, specifically), I think that reviewers certainly should (though they might not always) read the comments on the post so that they know what's flying. There's nothing wrong with writing a comment that says something along the lines of

I am flagging this post as "not an answer" because I don't think it answers the question. Please [edit] your post or it will be deleted.

And as for comments, I don't think there is much to gain. The use case is much less common than the one for VLQ/NAA, and doesn't save the mods anything because they'll anyways have to read a custom message to handle your flag.

Not the answer you're looking for? Browse other questions tagged feature-request status-declined flags communication .

258
Closing changes: [on hold], unclear, too broad, opinion-based, off-topic reasons, bye-bye to Too Localized
64
How aggressively should we maintain and improve very popular questions?
299
Add optional box for spam flags letting you say why you think it's spam
80
Vote to delete answers as duplicates of earlier answers
21
Spam flag if it's off-topic but doesn't actually link to product/company, but profile does?
7
What to do if someone posts a second answer that should have been an edit?
5
Where did my newly posted question go?
2
Review audits are broken?

220
Allow flagging a comment after upvoting it
193
Allow moderators to reply to a flag
418
Add an "I don't understand" option for review audits
129
Let's get rid of the 10K flag queue
56
Hide "not an answer" and "very low quality" flags in the moderator flag queue
299
Add optional box for spam flags letting you say why you think it's spam
55
The same user should not be able to re-flag a comment multiple times for the same reason
420
Can a machine be taught to flag spam automatically?