I recently accidentally closed an edit review window without taking any action on it. Since I wanted to take action (I was using another browser tab to confirm details in the edit) it was frustrating to have it disappear from the edit queue.

Using the browser "back" button didn't help, as that dynamically reloaded the page, showing nothing needing editing. Moreover my "recent actions" list did not show that as an action (isn't skipping an edit an action?).

The major problem here was that I didn't have any easy way of finding the post in question, so I could click the "Edit" link. Finally I found it in the browser history.

I suggest a way of seeing a list of recent suggested edits, that you may have skipped but are still active, and thus you are still entitled to take action on the suggested edit.

Just tested again with a recent "low quality post". I closed the browser tab, and the post dropped out of my review queue. It also did not appear as a "skipped" edit. So it looks like the server has noted I looked at it, and as I did not take any direct action (like clicking the Skip button) it has silently removed it from my review queue. Now I can't find it unless I dig it up on my browser history.

I recently accidentally closed an edit review window without taking any action on it. Since I wanted to take action (I was using another browser tab to confirm details in the edit) it was frustrating to have it disappear from the edit queue.

I can understand how this would be frustrating. As far as I know the only time SE saves a draft is like when you have started writing a question or answer, but it only saves it a draft for like 1 or 2 posts per site.

There are no drafts that are saved for editing posts whether in the review queues or on the actual posts. Most suggested edits that need to be improved by editing in the review queue normally don't take too long. Also, there are usually many different people doing reviews so they get handled pretty quickly.

As you've tested, this happens in any queue where if you close out the window/tab of the review you were given, you won't be able to go back in the queue and review it unless you have a direct link to that review (and of course the review still hasn't been completed by other users).

Now, if you'd want a list of links to recent reviews that have been given to you, I'd say they could do that, but I doubt they will since they have denied previous related requests, like here. Or maybe you'd be fine with just not removing unacted upon reviews from the queue if they are still active? I don't think that'd be too hard to implement, but don't think it'd be very worthwhile to implement it for reasons below.

I think most people have had something similar happen to them. In this case, I don't think it's worth developer time to create this feature since it's a pretty rare occurrence for most users and because reviews usually get completed quickly, there's not much real point in having this feature.

So what can you do? Be extra careful when spending any long amount of time editing a post as to not close the window. Go/search for that post using the search feature or google search. Edit that post directly instead of inside the queue.

I suggest a way of seeing a list of recent suggested edits, that you may have skipped but are still active, and thus you are still entitled to take action on the suggested edit.

You can already view reviews you have skipped. 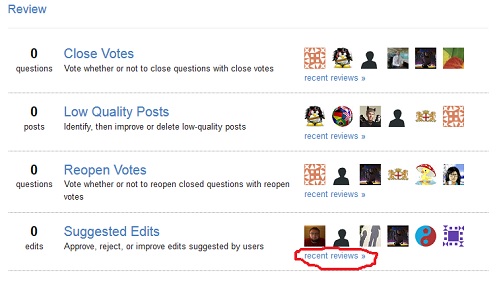 Now you will see a list of your reviews in that queue. If you don't already have the checkbox at the bottom selected (show skipped reviews) then checkmark it to see your skipped reviews as well.

Not the answer you're looking for? Browse other questions tagged feature-request review edits suggested-edits .

69
Add a “recently viewed” tab in the user account page

807
Allow an edit to notify downvoters: “I think I've fixed the issue now - please check”
283
How do suggested edits work?
412
Decision on rejected edits should be displayed as a notification to the editor
527
The current review system encourages fake reviews; some people upvote everything rather than actually fixing problems
160
What are the guidelines for reviewing?
204
Stop using real accounts in suggested edit audits
385
Add an “I don't understand” option for review audits
106
Give Community ♦ a review ban
28
Can our Review History also list the items we have skipped?