Now, I might be beating a dead horse here, probably one that has been dead and decomposing for a while now, but I'll try it anyway.

There have been plenty of discussions about the new graduation mechanics, and the most controversial one is that the higher privilege levels that come with graduation are still coupled to the design.

The privilege levels are one of the graduation aspects that I think is the easiest to tie to objective measurements. The reputation required for actions like closing should be elevated to the graduation levels once a site has enough active users at the elevated levels to ensure efficient moderation.

I suggest to just tie the elevated privilege levels to a certain number of recently active users above 3k reputation. Closing is the single most important community moderation privilege just behind editing. I'm ignoring deletion as this can be handled by diamond moderators for smaller sites. Editing should be covered by the number of 3k users as well as the requirements are lower than for closing.

I'm not proposing any hard number, that should be done by evaluating all the existing successful betas, but I'd estimate something like ~15-20 users at 3k+ that have been active in the last month. Enough to handle most closings by the community without the diamond moderators.

Elevating the privileges too early is problematic, I still remember Gaming which had a period just after graduation where you needed pretty much every 3k+ user just to close a question without moderators. I think this is one of the graduation aspects that is suited best for an objective threshold, there isn't much debate necessary, either a site has enough active 3k+ users or it doesn't.

This was actually one of the things that I was looking at when we were having the design-independent discussion internally. One of the things that was always discussed was privilege levels, and whether a graduated community will be able to handle those increased levels. So I looked at the stats: 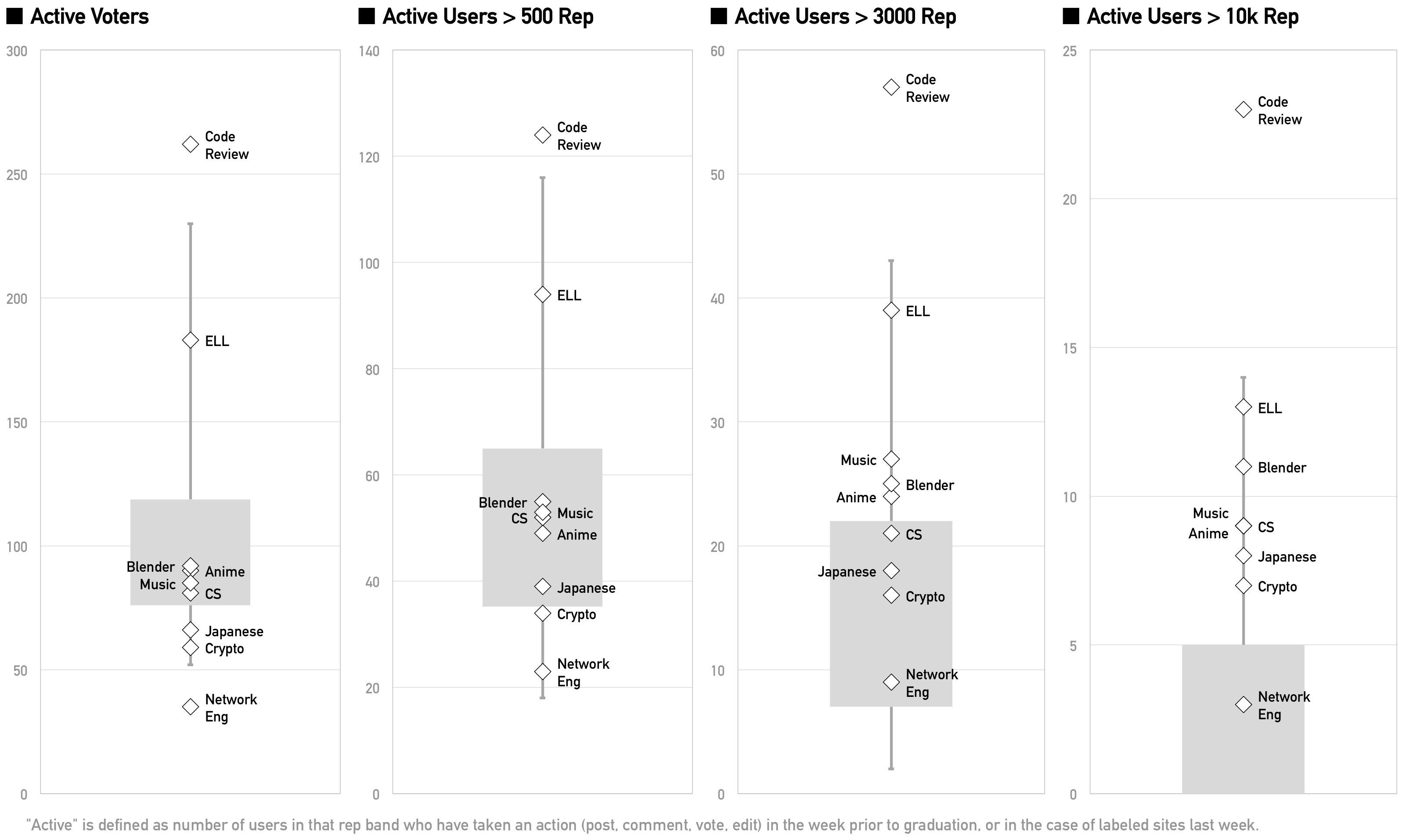 The grey box represents the range where 50% of all sites sat at graduation -- the lines are the highest and lowest values of sites at the time of graduation. Because they were kind of special cookies, SO, SU, SF, and Programmers are all excluded in this graph.

What I looked at was:

The sites I picked were those that we were looking at for design-independent graduation or were having an election prior to graduation.

The point is that each community has a range of values for this. While Code Review is well prepared no matter what the privilege levels go to, that same concept wouldn't work so well for say Network Engineering.

As explained in Ana's post we are definitely still looking for ways to make this work, and your idea is definitely something I've been milling about with in my head. Specifically, I was wondering if slowly ratcheting up privilege levels as the site grows so that there isn't a sudden jump in required numbers may be better.

One of the things that came out of our internal discussions on design-independent graduation is that a sudden jump in privilege levels will feel bad to lower rep users. These are usually the folks who don't speak out on meta, but generally make up the majority of a community. For instance, back when I was elected a mod, I looked at the reputation of voters by taking a look at badges (since you get badges for checking in on an election, and for actually voting): 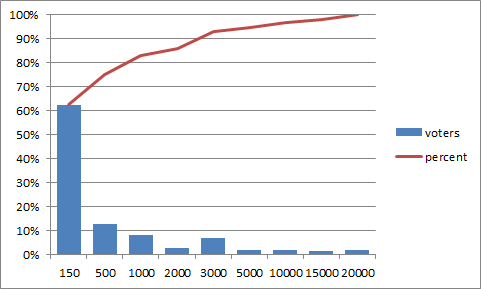 So 60% of voters have less than 500 rep. Almost 3/4ths had under 1000. These people lose a bunch of their fun magical powers when rep levels go up. So the issue wasn't so much "can a community support higher privilege levels?" which everyone kind of agreed was not an issue for many sites in the design-independent graduation discussion, but rather the sudden increase hurting those users (who are a large part of the communities, but who rarely speak up on meta).

On one hand this would mean that each community would have privilege levels according to what they need for their site, which is good. On the other hand it would be a bit confusing (since rep levels would be different on each site), and it may discourage less active users who seeing the rep requirements go up may not feel as motivated to try to reach them (since the goalposts are changing).

I know I posted this as an answer, but it isn't really an answer so much as giving you what I've already been thinking about on this. I trust that the information is better in your hands than sitting about in my head anyway.

Not the answer you're looking for? Browse other questions tagged discussion feature-request privileges beta-phase .

103
Design-Independent Graduation is on for early September!

921
Why aren't people voting for questions?
264
"You have gained power. Here's how to use it." kind of message
1248
Don't throw away all votes when a user is deleted
409
Graduation, site closure, and a clearer outlook on the health of SE sites
236
Feedback Requested: Design-Independent Graduation
2502
Firing mods and forced relicensing: is Stack Exchange still interested in cooperating with the community?
981
Firing Community Managers: Stack Exchange is not interested in cooperating with the community, is it?
551
The company’s commitment to rebuilding the relationship with you, our community
411
Swag is coming back! (temporarily paused)