Header with inline image does not work in SE's Markdown

I decided to rewrite the whole question in order to address some points made by James and HackerKarma in the comments. Sometimes I forget the way this site works. :)

I decided to come here and ask for guidance about the Markdown support in the StackExchange framework. There is this thread in TeX.sx in which I'd like to include an image reference near each header (in order to provide more info on each journal's location). The following Markdown code shows my humble MWE:

I tried it in SE's own editor, but both preview and final result lead to the following ouput (note that the American flag was not aligned to the header text): 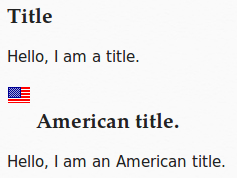 Then I decided to take a look in another Markdown editor to see if the result was similar to the one I got before. I tried StackEditor (which is not in any way affiliated with StackExchange) and got something along the lines of my original expectations: 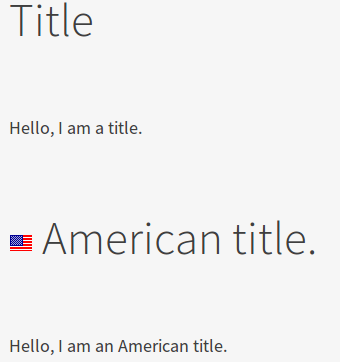 Then I decided to ask you people if this behavour is actually intentional (by design) or perhaps an issue in the Markdown parser?

In the comments, James raised a valid point asking if the output should really work like that. Markdown seemed to be a loose format in its beginnings, so each implementation would handle things differently. Even extensions were available, in which, to a certain extent, deviates from the original intention, but that is beyond the point. :)

I found a Markdown spec attempt in CommonMark which aims at shedding some light on the ambiguity of the original proposal. I found the following paragraph which covers my doubt:

But as I mentioned, I don't know if the original SE implementation covers this very specific case. So I'd like to know if the behaviour is intentional or not. :)

This has nothing to do with Markdown processing. Comparison of StackEdit HTML output and SE HTML output shows them to be essentially identical. And you can reproduce the layout issue directly in HTML:

Why? Because SE style is to have 1em bottom margin for images, unless they appear within a paragraph:

The margin isn't there for inline images

The margin could be removed with additional style rules for images in a header:

although the benefit/cost ratio is questionable.

Not the answer you're looking for? Browse other questions tagged support design markdown .

504
How does deleting work? What can cause a post to be deleted, and what does that actually mean? What are the criteria for deletion?
1098
How does accepting an answer work?
575
How does "Reputation" work?
592
How does the bounty system work?
171
Does Markdown have a way to express strikeout?
658
What is the association bonus, and how does it work?
581
What is syntax highlighting and how does it work?
981
Firing Community Managers: Stack Exchange is not interested in cooperating with the community, is it?
749
New Feature: Table Support