What to do if my question is downvoted for no reason? [duplicate]

Can I consider it as an abuse if I seek for reason but ignored? Can I flag it saying it is an abuse or what can I do to know what is wrong with my question?

Assume the question has 20 downvotes and has no comments at all.

What to do if my question is downvoted for no reason?

If it literally and absolutely is for "no reason" then you do one, all, or some of the following depending on your personality:

In all cases, I suggest "1", and possibly "2" and "3" depending on the scenario, as the other options do nothing useful or helpful for you or other users.

Assume the question has 20 downvotes and has no comments at all.

I would then also assume that there is a very good reason for the downvotes. One or two downvotes could be nonsense reasons - someone got out of the wrong side of bed, lost their keys, etc.

But 20 downvotes is a sign you need to step back and carefully evaluate your question. There is something wrong, and you need to find it and address it. 20 downvotes also means it probably shouldn’t be too hard to find or know what the issue is, as that's a fair number of users voicing a negative opinion.

Downvotes without comments are not abuse, no matter how many there are, they are a critical part of quality control on Stack Exchange.

This question does not show any research effort; it is unclear or not useful

This is an efficient warning for any future reader that there probably are big problems with the question. 20 downvotes, as per your example is a definite signal in itself that the community has found something wrong with the question. Sure, some may be 'pile on' downvotes, but the majority would be legitimate.

This has been asked in varying forms again, again and again (a simple search finds a lot of these kinds of questions - a canonical response is Encouraging people to explain downvotes) and tend to be magnets for downvotes.

While this question isn't quite about this, I'm going to talk about the comment thread on your question about pacts and treaties: 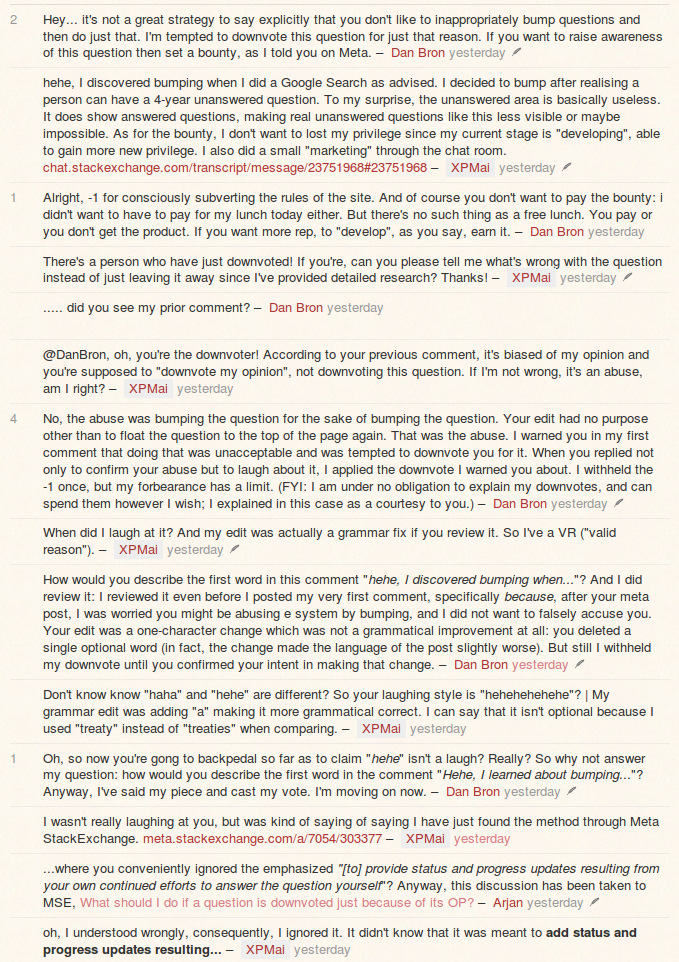 You say for no reason, and yet he said the following:

then you laugh about it (yes, hehe is a laugh) and he responds

Alright, -1 for consciously subverting the rules of the site.

There's the reason - you broke the rules of the site, on purpose. You admitted it (2nd comment), and the edit is clearly a bump.

Now the next comment he gives explains it again. He says why he down voted. On top of that, his comment has 4 up votes on it - so in total 5 people agree that you were abusing the system.

Not the answer you're looking for? Browse other questions tagged discussion down-votes .

134
I've just been downvoted. How should I react?
1113
Encouraging people to explain downvotes

1113
Encouraging people to explain downvotes
878
Why aren't people voting for questions?
1393
Fastest Gun in the West Problem
1759
Could we please be a bit nicer to new users?
640
Your answer is in another castle: when is an answer not an answer?
2756
A Terms of Service update restricting companies that scrape your profile information without your permission
2290
Firing mods and forced relicensing: is Stack Exchange still interested in cooperating with the community?
640
Monica's situation continues unresolved. Is SE hoping the problem just goes away?
1905
Stack Overflow is doing me ongoing harm; it's time to fix it!