Render TeX in comments by default (on the iOS app)

Thanks for fixing TeX rendering in questions and answers on the iOS app.

My one gripe I do have is that rendering is disabled in comments unless you use this interface. 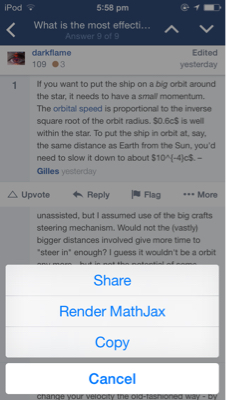 Can we please have rendering by default. Pretty please.

I've toyed around with the idea but it's not a trivial problem. On the web, MathJax is free to run across the entire page but in the mobile apps, each question/answer is boxed in its own web view and separate from the native title and comment elements. Comments for example, are rendered by first using the DTHTML HTML to NSAttributedString parser and having TTTAttributedLabel draw them. I've also not seen a way to run MathJax independent of a browser so that rules out a JavaScriptCore pipeline.

It's definitely in the realm of possibility but not something I'll be tackling in the near future.

Not the answer you're looking for? Browse other questions tagged feature-request status-deferred ios-app mathjax .

0
The fraction entry, found in the comment of an answer, doesn't appear correctly in the app
23
Please add TeX rendering on the iOS app

1108
Encouraging people to explain downvotes
792
Allow an edit to notify downvoters: “I think I've fixed the issue now - please check”
898
Show all of my question/answers to me even if they are deleted
204
Offer an XMPP method for chat
491
Implement ```-style (fenced) Markdown code blocks
1161
Don't throw away all votes when a user is deleted
23
Please add TeX rendering on the iOS app