When viewing Unix & Linux in the normal web interface (I checked Firefox and Chrome under Linux), double quotes " in titles are rewritten to their non-ASCII slanted versions “…”. This is highly inappropriate on a site where quoting is an important matter. Double quotes in titles are often the ASCII character (U+0022 QUOTATION MARK) in a bit of Unix shell syntax, and showing different characters gives the impression that what is written is not shell syntax. We can use the typographically pleasant U+201C and U+201D when we want. Please leave U+0022 alone when we mean it.

This request applies to any other site whose habitual topics assign meaning to ASCII characters. Stack Overflow, Super User, Server Fault and Ask Ubuntu have the same problem. This is not an exhaustive list.

Note that unlike Fix Markdown/SmartyPants in question titles I am not suggesting that titles should support Markdown, but that they should be displayed as is.

(Posting as a bug because, whether quote rewriting was part of the design specification of the site or not, it is undesirable behavior, so it should not have been. Posting now because it has yet again confused at least two readers.)

(Besides, if you start to edit the question and cancel, you get to see the actual title. So the title rewrite isn't even consistent.)

We have now disabled all Smarty-like modifications text in titles.

If folks want em-dashes (ALT-0151) and fancy quotes (ALT-0145 through -0148) to appear in titles, they are welcome to add them. But we won’t convert it automatically any longer.

In the Android app, this seems to be the case: 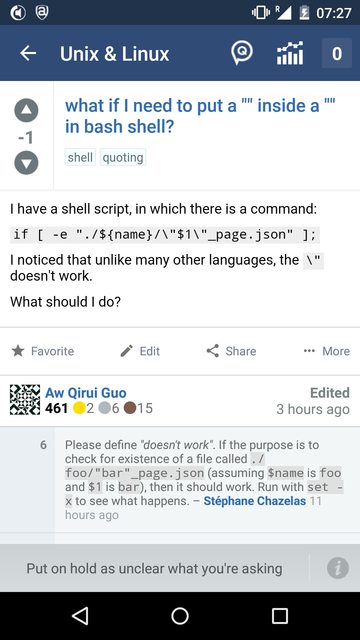 Of course, I can't say for sure if that's because the font in use displays pretty quotes the same as ASCII ones, or because they left quotes alone. The title can't be selected or copied without editing.

(Just noting that they seem to be perfectly capable of doing this in one place, at least.)

Not the answer you're looking for? Browse other questions tagged bug status-completed design title .

55
Fix Markdown/SmartyPants in question titles
17
Question titles collapse "-​- " (double minus signs) to "-- " (mdash)
10
Do not replace two hyphens with em dash
10
Don't change double-hyphens in titles into dashes. At least not on Stack Overflow

5
Double quotes show up as &quot; in preview
8
Quoting commands that have quotes ... in question title: is there a correct way?