There should be new, optional Markdown syntax to allow a post author to specify that a certain link or type of link should open in a separate tab, such that the reader isn't taken away from the question.

To borrow a quote below from Nathan Tuggy:

Three of the prime annoyances with the current behavior that continue to get me (and I know others too):

In these (and several other cases, described below), I wish that the link could have been specified to open in a new tab.

Other suggestions in the past have asked for all links (or all external links) to open in a new window, by default, without exception and with no user control (author or reader). Even worse, the commonly-targeted duplicate says, almost verbatim:

No wonder it is status-declined; it is asking for status quo. That doesn't make it a useful duplicate target.

I'm suggesting that this be made optional, without changing the current and default behavior, for the following sorts of links:

One of the things that prompted me to promote this feature request even though similar, more all-encompassing ones have been denied in the past, is that several of these services did not exist back in 2009 - the way we answer questions has evolved, and continues to evolve.

The resulting HTML would have target=_blank, and should also use title or other attributes to indicate the behavior for the visually impaired (as per this UX answer).

I have a couple of unresolved thoughts on this request:

Yes, users can consciously choose to open a new window using various methods like Ctrl+Click, right-click, etc. But if you're going to scream "don't take my control away from me!" then don't ignore that if you really, really, really want your links to replace the current content instead of opening a new tab, especially if you know that certain types of links will likely do that, you can simply drag the link to the current address bar, which gives you your control right back (on this site and on all other sites that put target=_blank on all of their links, or even just the external ones).

There was a study done about whether people know how to open a link in a new tab, and I'll spare you the suspense: no they do not. And I suspect the cross-section of those and our audience - especially the steady stream of new users - is not insignificant. The model most web sites have been following for years is that at least external links open in a new tab, precisely because even one audience member might not know how to do that on their own (or may get flustered when they expect to see an image or code snippet in a new window instead of taking them away from the post they were reading). I know we like to be different, but we can't be afraid to try to make the experience a bit better for newer users in certain scenarios, for fear that it would be "too normal."

Now, I know that it is not practical to make this a user option, primarily because of the way the HTML for posts is stored. (It would be prohibitively expensive to store multiple copies of the post to conditionally serve the right one, or to parse and correct all links in all posts at serve time. Caching can prevent some of this, but for active posts I would be nervous about the additional overhead.)

But I also know - and it is clear given the number of times this has come up - that I am not the only person in our community who feels as follows: It is not always the best option to move someone away from the current page to show them certain types of content while they are in the processing of reading or writing a post or testing the answers it contains. 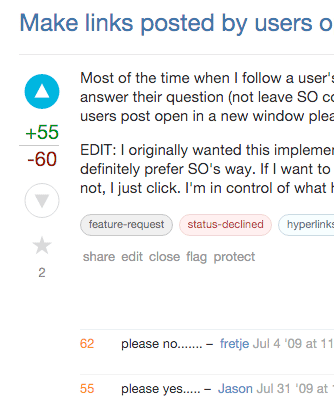 (Thankfully, I'm not asking for either of those absolutes.)

No, because with this, suddenly, you'll never know if the poster created a link that opens a new window/tab, or not. Never mind the different style of posting amongst different users, I doubt a single user would be so mindlessly consistent in using the special syntax every time.

Right now, I know that if I simply click a link anywhere on a Stack Exchange site it will re-use the current window/tab. If I want to open a new window/tab, I need to Ctrl-click/middle-click/right-click-and-choose-open-link-in-new-tab. To some people that's not how they'd prefer it, but at least it is consistent. Designing for "least astonishment" and all that.

I'm afraid that I think this is a worse idea than having all user-created links open new tabs, and I think that one's pretty bad.

Don't remove the choice from readers.

There are occasional cases where it makes sense to open a new window — for example to display help about a web application. Over the years, the abuse of that feature has led browsers to crack down on this feature and limit the ability to spawn popups.

A link in a Stack Exchange post does not meet any of these few cases.

If you like links to be opened in new tabs so much, install an extension in your browser that makes it the default. Or just use middle-click or long-click or whatever it is your browser uses.

If I understand correctly, your proposal, in a nutshell, is this:

I believe certain types of links should open in a new tab, and I would like new markdown syntax that will allow people to write links in their posts that open in new tabs, but only for these specific types of links. This would also add a visual indicator of some sort so people could tell if the link will open in a new tab or not.

This strikes me as strange because you are attempting to solve your problem - you don't want to middle-click, or control click, etc to open a new tab - by making other people do more work - adding [newtab] after links they think should open in a new tab.

I don't see how this fixes your problem. Not only will we have to educate users so they understand there's a choice, but you'll find many refuse to use them, and they won't exist on older posts.

Until new users get used to it and find the icon and its meaning, it'll be utterly confusing to them - "Some links open in a new tab, and some don't, and it's not consistent!"

So even if I agreed with the "new tabs" crowd, I'd absolutely disagree with this specific implementation.

Let me illustrate the way people use the site now, and how they'd have to use it if this were implemented:

As you can see, you decide how you want the tab opened, and you can instantly do this without further consideration.

With the proposal, though, here's the new process:

So the downside of the proposal is that it requires you to carefully check each link, and it adds an extra required effort if you disagree with the author and want to open in the existing tab.

Right now the effort is the same whether you want the existing tab or a new tab. With this proposal the effort goes up for everyone.

It's bad enough when a site takes the choice away from the user; now you want to do it for some authors, for some links? That's terrible UX; it's not consistent at all and it's a burden for the users on both sides -- the guy whose browser is spawning unwanted tabs and the guy who had to write the markdown to do it.

If you don't change the browser default, the user still has a choice. You have identified content that you would rather see in a new tab, and all modern browsers make it easy for you to get that behavior without inconveniencing anybody else. However, if the author of a web page decides that links are going to open in new tabs, there is nothing the user can do, short of applying custom code, to undo that.

So on one side, people who want new tabs have to do a little more work (right-click or control-click or long-press or whatever) and people who don't get their preference by default. On the other side, people who want new tabs get them automatically and so does everybody else, regardless of what they wanted. You're going to need a much stronger argument before that proposition looks reasonable -- you need to establish that it is never reasonable to want to follow those links in the same tab. You have not made that case.

Comments are short, and are intentionally treated as second class citizens to answers and questions - ephemeral, meant only for clarification and minor correction.

This problem has already been solved for the important content - answers are saved, so if you lose your place and come back you get your draft back.

It is not that important to so drastically change the user experience and user interface for want of a comment draft. If you are frequently drafting very long comments with multiple references, you are probably not using them as intended, but even then it shouldn't be difficult to recreate the essential points. I do, however, know that some users draft their comments on an external editor - this works fine for them, and may suit your needs as well.

Further, having this behavior on some links, but not all, forces users to discern the difference - Am I clicking a link that opens a new window? Am I clicking one that goes to that page? This is a burden you place on all users, not just those that prefer one way or the other.

The workaround you suggest is more work than a middle click, so all else being equal, the total effort expended will be less keeping the current interface as-is.

If, at some future point, Stack Exchange decides to move to a "new tab" modal, I strongly suggest they use it for every link. Mixed sites are the worst user experiences between the three choices - let's not be fence sitters.

Initially I was ambivalent.

If someone wants to post a more substantial yes answer I'll be happy to remove this one (if deemed appropriate).

Not the answer you're looking for? Browse other questions tagged feature-request markdown hyperlinks .