Why not require a bit of reputation to post Chinese characters?

I am wondering why we can't make it a privilege to make a post with Chinese characters. It would be logical to put it in 'remove new user restrictions', but I'm not sure if 10 reputation threshold is enough to prevent the spam completely.

Of course this shouldn't apply to Chinese Stack Exchange.

This is something that has been bothering me for a while.

I designed the anti-spam / anti-abuse layer that's been keeping most of this crap out for the last couple of years, and it was designed with 'snow shoe' spammers in mind.

For those of you unfamiliar with the term 'snow shoe' when it comes to spamming, well, consider a snow shoe: 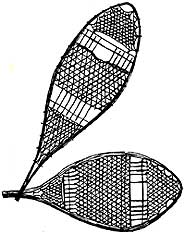 What this effectively does is spread your force over a much larger area, or, if you're a spammer, thousands of infected Windows XP machines or rooted web servers run by lazy hosts that are incredibly great at not looking like what they are.

They've gotten exponentially bigger, and better. Many that you see actually posting have replaced machines with humans that aren't otherwise able to market their skills, or want on-the-job training to learn them. Jeff put it best, it's industrial. We're keeping a lot of it out, but I'm uncomfortable with how we're positioned.

The solution here isn't tossing problematic character sets into a corner to think about what they've done (though we have done this to thwart larger onslaughts) - the solution is to beef up the Bayesian-ess of what we currently have so it trips on the actual content better, without additional inconvenience to passers-by. There are more than several systems in place looking at this that should be better.

Several ideas are floating around at how to do this. Don't think, even for a second, that this is a problem regex can solve. It can't, and my therapist won't let me talk about that to any further extent.

We're working on it now. I'll update when we've got something more, though (due to the nature of it) - it'll continue to be a bit of a black box. It is a priority, I think we've got what we need to really hit back, but it's a long series of complex changes involved.

My job here is to make them not-so-long. I'm working on it.

While this is tempting, I do not think it is a good idea.

SE could implement this on a few sites, like the sites about western languages. But it should be OFF by default.

Not the answer you're looking for? Browse other questions tagged feature-request spam languages unicode .

93
Would anyone care for some processed meat-like substance with a gelatinous glaze?
35
New users and attaching images
10
Why I can't edit my post? Warning that I am trying to spam!

255
Reset votes on migrated questions
334
Don't remove the @ part of my comment
1245
Don't throw away all votes when a user is deleted
138
Stop using community wiki as a reputation denial mechanism
2788
A Terms of Service update restricting companies that scrape your profile information without your permission
55
For protected questions, require local reputation to comment
420
Can a machine be taught to flag spam automatically?
173
A machine can flag spam automatically. Can it do better?
126
Off-site avatar images are a privacy risk