Don't automatically reopen a question when its migration history is cleared

Today I handled a flag on a question that was migrated to Engineering and subsequently closed as "unclear what you're asking," rejecting the migration.

I decided that I wanted to unlock the question. Since it had been deleted on its original site and was on topic for our site, I wanted to remove the migration notice as well as it was no longer useful. For reference, here's what a migration notice currently looks like:

This question came from our site for balpha's magnum opus. Votes, comments, and answers are locked due to the question being closed here, but it may be eligible for editing and reopening on the site where it originated.

I understand that closing the question caused the migration to be rejected; this behavior changes closing/reopening from cause to effect, which I really don't like. When making decisions that affect how users can interact with content, we should be careful not to place too much importance on meta concerns like whether the question was migrated and where from.* A change to the migration history doesn't suddenly make a question clearer or more broad; it doesn't even necessarily have direct implications for the question's topicality.

More generally, I think this is a case of an action with too many side effects. I would suggest that, in principle, an option that says "do something" should generally just do that thing; sometimes two things is okay, but if it's doing three distinct things (from the user's perspective) it needs to be looked at.

The "clear migration history" mod action should not reopen questions. In the case that the migration history is cleared from a migrated, rejected question, we should still see that (up to) 5 members of the community voted to close the question. Instead, in order to get the desired result (question stays closed), the moderator has to close the question again after clearing the history, adding junk items to the revision history and removing the names of the (up to 5) community members who originally voted to close from the banner on the question.

If this proposal is rejected, at the very least I think it would be appropriate to rename this option in the mod menu to make the side effects clear, along the lines of: 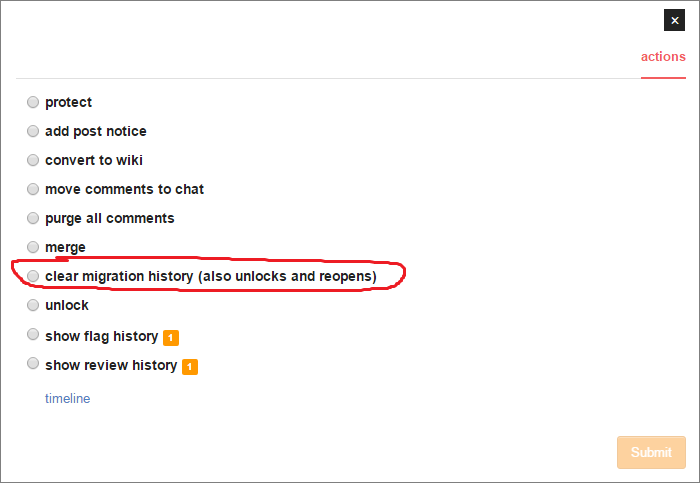 * For example, I know at at least one case where placing too much importance on migration status spawned no fewer than four Meta discussions across three sites—see Meta HSM #1, Meta HSM #2, Meta History and MSE.

This kind of boils down to when you're actually supposed to use that feature, though. It's really not there for moderators to remove migration notices from questions "because it was no longer useful" - and I don't think anyone here would encourage anyone to do that.

The feature was created so that you could fix things that got totally screwed up, or should never have been migrated (we also use it for migrations from closed sites, but that's a different issue) - and it automatically reopens and unlocks so that the moderator doesn't have to go through the hassle of doing it as a separate action. Really, the use case for the feature is intended for situations where the question should also be reopened. If the question shouldn't be reopened, you're probably using the feature wrong.

If the question was migrated, and it should have been migrated, the migration notice should always be there. Now I want to clarify one thing you might not realize: that the migration notice itself actually has two states. If the question got migrated to your site and is currently in a locked state, then the banner displays a "migration rejected" notice, which is meant to tell users to go back to the origin site to do something with it, since it can't be touched here.

The simple act of unlocking the question, just that, nothing else, will change that notice back to a standard "migrated" notice, with information about the site it came from. Since it's no longer locked, users can then vote on the question (including reopening) as they see fit.

The only other reason I can think of that you might want to clear migration history is because the stub on the other site is now deleted, which happens in almost all cases because they get automatically deleted after 30 days.

But if that is bothering people and no one finds the notice useful, then it makes more sense for us to modify the behavior to simply hide the notice from users after the 30 day mark, leaving the migration information in the revision history. Because that feature is somewhat destructive. It leaves a note that you cleared the migration history, but only moderators can see it. To all other users, it looks like the question was originally asked on that site, and there's no way for those users (who might be able to see the original question) to get back to the source site anymore.

I've run into this problem twice in the last few days.

The first time it happened, a migrated question was closed but fixable, and when community members tried to edit they encountered the lock. This caused a lot of confusion. I removed the lock, which is what this answer says I should do. The question was deleted and undeleted, which locked it again. After a second deletion and undeletion (yeah, we're discussing that problem), I cleared the migration history so that any further changes wouldn't add more confusion to what the OP is already experiencing. That was...not a great introduction to our site for that user.

The second time was a few minutes ago. A new user asked a question on meta instead of main, so I migrated the question. Another moderator (correctly) put it on hold, locking the post so the OP couldn't respond to the comments asking for clarification. Remembering the problems in the first case, I went straight to clearing migration history -- and it reopened the question. Fortunately I noticed and was able to reclose, leaving a messy history. I then came here to ask about it and found this question.

If unlocking is the answer to migrated questions a community wants to redeem, then it needs to be sticky. Once a moderator unlocks a post, it should be locked again only by moderator action. (Or, I suppose, a further migration, but you can't actually migrate a migrated question without mod intervention anyway.)

Not the answer you're looking for? Browse other questions tagged feature-request migration moderator-tools .

63
Allow diamond moderators to reverse question migrations?
45
Don't mark migrations as "rejected" if they were closed long after migration
18
Closed due to rejected migration leaves an awful dead end

994
Show all of my question/answers to me even if they are deleted
217
What is migration and how does it work?
259
Reset votes on migrated questions
420
Decision on rejected edits should be displayed as a notification to the editor
1252
Don't throw away all votes when a user is deleted
421
Add an "I don't understand" option for review audits
116
Add a "don't migrate crap" migration 'path' to all sites
182
A proposed philosophy of question migration
336
Gold tag-badge holders and moderators can now edit duplicate links