It looks like the duplicate banner changed. How does it work now?

I noticed this morning that posts that were closed with a gold badge dupe hammer have a new banner.

A couple of examples of the new look are below.

Is this a new change or just testing as I can't find a post on meta post about this?

What happens if the user doing the closing has a gold badge for multiple tags on the question?

We have made two changes to closure by users that own a gold badge:

First, we now look at the question's current tags instead of its original tags, unless you were the first one to add in a given tag (either by doing it yourself, or by approving an edit from someone else).

This is done to address the request made in: Only prohibit those who edited the tags from using the dupe hammer.

Second, we made some UI changes to make this behavior more discoverable.

So, to make the dupehammer easier to understand, we made making two UI changes:

The new notice (in case the vote was binding) looks like this (the popup shows on hover): 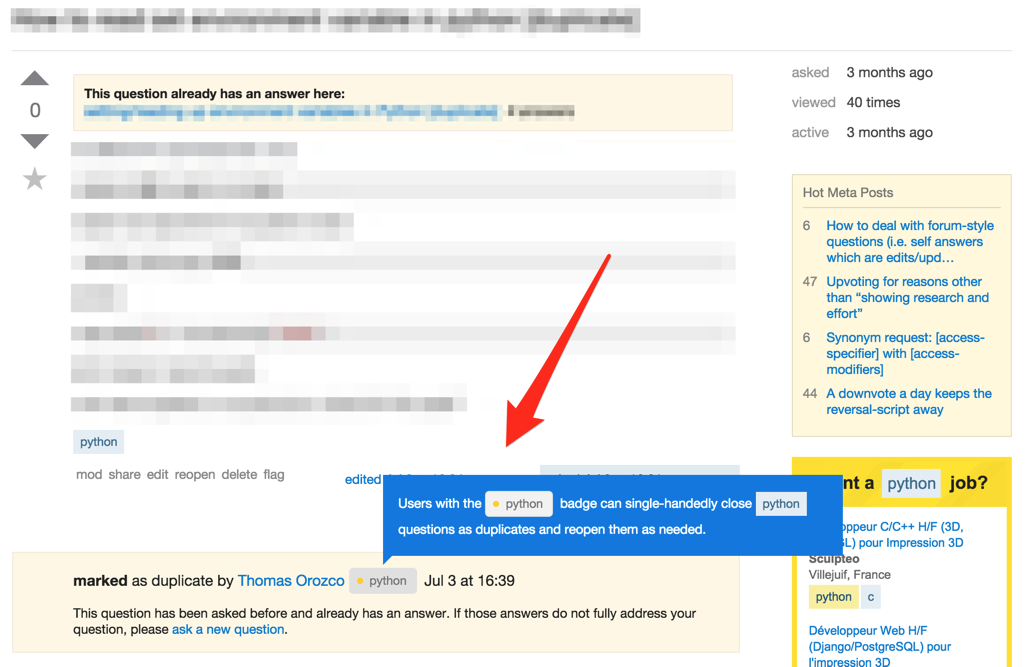 Note that this banner was not added on the first few uses of the hammer, which did not record any indication of the user having immediate closing powers. However, it was added to later uses which just had the old gold circle.

I noticed this too. Beyond the fact that it took me a minute or two to realise that the explanatory description is now on-click rather than on-hover, which is mostly my own fault and I can get over, my one note-worthy issue with the change is that it changes what it means to click on a tag.

That is, whereas everywhere else on the site (AFAIK?) clicking on a tag span (with its particular, identifiable styling) takes you to questions about that tag, in this one scenario it leads to a pop-up about the dupehammer. That's not a consistent and userproof UI.

If you have multiple gold badges in common with the question's tags, it chooses one. Here, I have both the sass and css badge, but it chose the css tag for the closure. Not sure if it goes by the order the tags appear in or the age of the badge when deciding (I got the css badge first).

Not the answer you're looking for? Browse other questions tagged support status-completed duplicate-questions dupehammer .

256
Increase close vote weight for gold tag badge holders
32
Dupehammer wielders can add their gold badge tags and then change the dupe target list
22
With multiple gold tag badges, what determines which of them will be used as hammer?
23
Show the gold badge in addition to the diamond when a moderator closes as a duplicate
13
Can't single-handedly reopen a dupehammered Q after editing gold tag to another gold tag
3
Dupe hammer - "original tags only" limitation
3
Change "original tags" to "current tags" in the help center description of the dupehammer
2
Golden tag badge owner can insta-close questions not originally tagged with a tag they own a golden badge for

1103
How does accepting an answer work?
577
How does "Reputation" work?
603
How does the bounty system work?
675
What is the association bonus, and how does it work?
256
Increase close vote weight for gold tag badge holders
347
New UI encourages askers to confirm or dispute duplicate votes
336
Gold tag-badge holders and moderators can now edit duplicate links
583
We're switching to CommonMark