This has been done before, but never got a response. I'm bringing it up again (rather than simply reusing the last post which is effectively dead now) for a number of reasons, including that lack of response and the fact that there have been a few recent occasions where seeing this data would have made a significant difference in effective chat moderation.

It's a pretty well accepted fact that chat moderation is... not all it could be, shall we say. Well, this would make an improvement: there have been a number of cases that I've seen in my tenure of spam-spam-flagging (i.e. spamming spam/offensive flags). These events disrupt rooms by bringing in a Mjolnir of mods, and a plethora of 10k chat users from all over the network, all trying to get at the flags and (sometimes) have a dig at the room where they're cast.

Allowing mods to see who cast the flag would enable us to stop these cases in their tracks - we've got the tools to do it, but we don't know who to use them on.

This seems to have been implemented now: 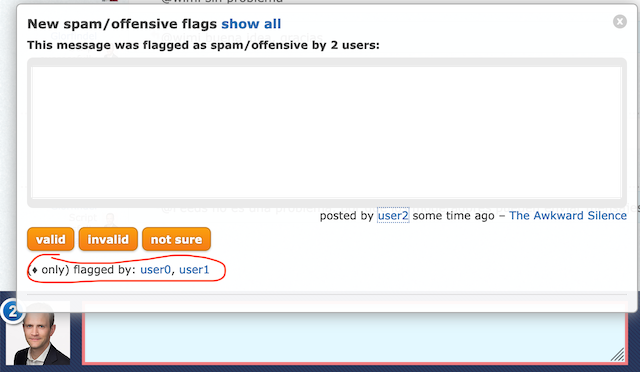 (names have been changed to protect the innocent)

The chatroom, The Awkward Silence, belongs to Interpersonal Skills and I'm not a moderator there.

Not the answer you're looking for? Browse other questions tagged feature-request flags chat moderator-tools .

168
Add escalation system to chat flags
85
Let me opt out of viewing chat flags
69
Make comment flagging work more like chat flagging, available to users with 10k reputation
163
Flags in chat are defective by design
300
Add optional box for spam flags letting you say why you think it's spam
387
If you're gonna talk Politics, you must respect those who disagree
422
Can a machine be taught to flag spam automatically?
173
A machine can flag spam automatically. Can it do better?