I'm using the beta Stack Exchange app version 1.4.2 with iOS 9.1. When I have a fast internet connection, it works as expected. However, when the connection is extremely slow (sometimes unusable), the app freezes for around 20 seconds and then crashes. This is worse than having no connection at all, since with no connection the app opens with an error message.

I found that under slow connections (GPRS1 in this case), the app freezes with this screen and after around 20 seconds, it crashes: 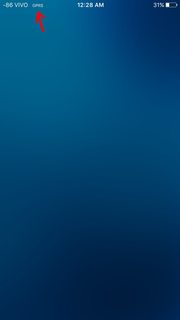 With no connection at all, the app opens and errors as expected: 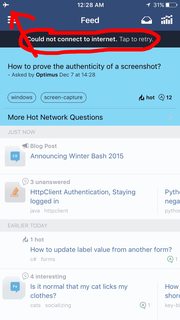 This is probably because the SE app tries (and fails) to connect to the servers when it finds a connection. I've noticed that when my wifi is a bit slower, the app takes a few more seconds to open.

1 Although this (GPRS) is a type of internet connection, I couldn't manage to open any web page with it.

This will be fixed in the next beta build.

The app depends on the site list (/sites) for many things it does. As such:

Because some cases could arise that we call the synchronous siteForApiSiteParameter: and the site list isn't up to date, the method's default action is to try loading the cache and block until completion. This of course assumes that this will be a rare case and that the /sites API call should complete in a timely fashion.

You, however, have reached a state where this call is being made every time you load the app and the request is so slow the device's watchdog timer is killing the app because it still hasn't finished launching after 20 seconds.

Now, every time you return to the app the feed prepares to render its saved contents, gets to the unknown site, and blocks on the call to /sites. Since you're on GPRS the app hangs and you get caught by the watchdog.

My solution has been to defer or eliminate calls to the /sites when rendering the sites.

The particular code you got caught on was for evaluating whether or not to display a site icon on a feed icon based on whether or not the preceding item was on the same site. There was no reason to even resolve the site here because the site parameters we had was good enough.

Similarly, the feed would pass the resolved site to the cell when rendering the site icon(s), meaning it would block when configuring the cell. Now the feed just passes the site parameters to the view and it either renders the known site or displays a placeholder background and asynchronously reloads /sites to display the icon when available.

Not the answer you're looking for? Browse other questions tagged bug status-completed ios-app .