Make it clear that certain hats can be awarded earlier, in their description

Time based hats, e.g. A New Hope can be awarded as soon as 12-14 hours before the actual time stated in the hat description, as explained nicely here.

However, this is far from being trivial, and decent people who think they got the hat when they didn't deserve it, tend to report this as a bug. All of those are quickly closed as duplicate which is fine, but it's waste of time for both sides, and might cause some grief.

Why not try and avoid all of this by adding something like "(±12 hours)" to the description?

Also, even more important to add such a thing to the hat description in the Hat Rack on our profile, since that what's being opened upon clicking the snowflake hat item: 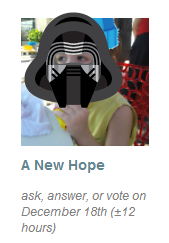 Besides, we want these descriptions to be short and simple, and most people either don't care about the exact timing or realize there's some leeway for time zone reasons.

Also there's the "these are descriptions for a temporary, just-for-fun event" argument, although I don't buy into that one so much.

I think we should just let it lie. It's occurred because people complained that they didn't get a hat even though it was still a particular date in their time zone, when the original hats were based on UTC, just like the rest of the site is.

So this is already an anomaly - most users who care already know that the rep cap is UTC day to UTC day, and so is every badge that has a timeframe component.

If we must add something, rather than being more specific I'd suggest we be less specific:

or even obscure it with fun:

And let people draw their own conclusions about it.

Alternately, make it a secret hat and let people define it themselves in the secret hat thread. There's probably a good argument here for making all the date based hats secret, or, for that matter, all the hats.

Not the answer you're looking for? Browse other questions tagged feature-request wording winter-bash-2015 .

-157
Don't close questions where the user has requested that it not be closed
72
Why didn't (or did) I or some other user get a hat although the requirements were (or weren't) fulfilled?
5
Possible typo on “A new hope” hat description
6
Hat earned before date in Winterbash

1
Make hyperlink text/description automated for certain sites
38
Make the FAQ clear on how a question can be reopened
184
Can we clarify to the OP that their question is not yet closed and the duplicates are only suggestions?
19
Make clear in the logon screen you can log in with your SE account
10
Make it clear that we can only add books which are available on Amazon
8
Make the “hats” vs “no hats” choice instead “users can opt out” vs “users can opt in”
28
In the low-quality queue, make it more clear that the canned comments are just that