It's not a big deal, but if we want a feature to automatically track the next tag badge maybe we also want it to be functional.

It's not too bothering if you have a tag stuck to a score low enough for the next tag badge for that tag, but I was lucky enough to have the tag shell-scripting synonymized when I had a score of 94 on that tag: 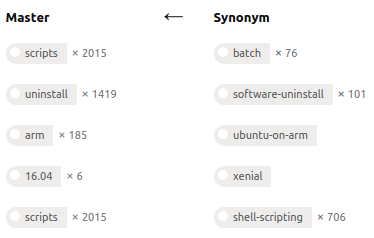 I.e. that broke the automatc tracking feature for me, because I won't see another tag badge automatically tracked until I'll have more than 94% of the required score for that tag badge (unless of course I pick one manually, but that misses the point of automatic tracking).

Worst case scenario would be having the tag synonmized at a score of 99 / 399 / 999, which would make the automatic next tag badge tracking feature completely pointless.

(by the way who needs to track a synonymized tag?)

The correct solution to this is to get the moderators on your site to either:

A synonym having questions tagged with it is meant to be an entirely temporary state while it's waiting for one of the two above actions to happen to it.

You do have the tag score in that tag, and that is your progress towards getting the tag badge. It actually makes sense to still display and suggest these, because you can still earn the tag badge by receiving upvotes on your answers which already have that tag or posting new answers to questions which already had it. It's just that no new questions can have that tag added while the synonym exists.

If you don't want to track that tag badge, which seems likely, you can always change which tag badge it's tracking by using the little gear icon to the left of it.

Not the answer you're looking for? Browse other questions tagged bug status-bydesign tag-badges badge-progress .

827
What are the badges I can earn on each site, and what are the exact criteria for earning each badge?
68
Can't track Tag Badges without 20k rep?
40
Tag badges are being awarded incorrectly
8
Can no longer toggle between tracking tag badges and tracking privileges?
1
Why do the tracked tag badges sort by number of answers?
7
User is tracking tag badge for non-existing tag with emoji