2015 Secret Hats: Is the Archimedes hat still up for grabs? [closed]

I would very much like to earn the Archimedes hat. 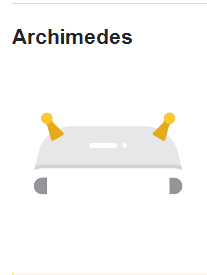 The two tips for earning this coveted hat are the following:

If solving a riddle refers to unlocking the secret hat, which seems the most sensible interpretation, then where do you post your solution? I have had conflicting advice from two different mods. One told me,

How to earn Archimedes: posting on meta (or anywhere else public) is and always was a bad way of submitting guesses, because it ruins the fun for everyone else once the correct trigger is posted. The preferred way would be to e-mail guesses to team@stackexchange.com. Or even to me directly

Now, I happen to think that this is not an idyllic solution. First, email correspondence implies privacy, and if an exchange is private, how would the community know if the rules of the game had been respected? Secondly, the person awarded the Archimedes hat might not reveal the key to unlocking the secret hat to third parties, or they might very well do so, via an exchange of comments which can be easily deleted. And lastly, the number of emails that would bombard the mods would be scary to say the least. Therefore, informing Stack Exchange moderators through emails offers no guarantee that the secret won't be revealed later to friends when they are having a chat.

Which brings me nicely to the second piece of advice,

To have chance of winning the Archimedes hat, better guess in the Tavern, or David's room for secret hats. :)

The “Tavern” is a chat room in meta SE. I went to visit and lurk around the “Tavern”, and basically there was some talk about spam, and a lot about free hand circles. The only information I gleamed about the secret hats was the following

There are currently thirteen rooms on SE meta, none were called “David room”, so I went into a chat room called the “Shadow Den”, thinking it might be some sort of code... it's not. But there are some very nice folk there. Anyway, do you just barge in The Tavern, post your off-topic solution and then hang around? I suppose some regular chat users might reply, but I don't know anyone in meta SE, it's quite an intimidating environment for an outsider such as myself. I doubt I will post my solution in a chat room, if that is the only venue but someone else could.

If you ping me with the solution to Onion Knight, I promise I might email you a PayPal check when I get the hat ...

You're right. The Archimedes hat was poorly designed on our end and kept around mostly for tradition's sake in what was, in hindsight, not a great decision. In the long term, our solution is going to be "don't use that hat idea again."

For the remainder of this year's event, I still think private communication is the way to go. I haven't been awarding Archimedes for hats that were publicly "spoiled" (either on meta or in chat) for the obvious reason, but as you say, people could theoretically be sharing the answers off-site (as I said earlier, poor design by us). As to your other point, it's kind of you to worry about our inboxes, but there really aren't that many people interested in playing the secret hat guessing game. E-mail volume is nowhere near a problem (though, in a way, that's at least slightly reassuring that there's no cheating going on in practice).

As for trusting us, that's kind of built into the hat, since it's manually awarded. But since we're employees at the company that runs the network, if you don't trust us, then we're failing on a fundamental level and I would hope we can have a discussion about that.

Not the answer you're looking for? Browse other questions tagged discussion chat winter-bash-2015 secret-hats .