Why has Stack Exchange stopped working on the Android app?

Recently I started to post bug and feature-request for android-app, see:

After realizing that the iOS app has better features and fewer bugs than the Android app, I heard that Stack Exchange has decided to stop working on the Android app. In other words, very slow fixing of bugs, no work on features.

I've seen from About in the Android-app:

So, I want know why has Stack Exchange (nearly) stopped working on the android-app, or at least working on it way less than on the ios-app?

Update: Nearly after a year it seems nothing was done. I fear that the Stack Exchange Android App is being discontinued!

I told Shadow Wizard I'd respond to this last week and I've been meaning to every day since it was posted, so here goes.

TL;DR: Work has not stopped on the Android app nor will it. It's definitely slowed down, but it's not stopped.

The Mobile team is presently just two people: Me, and Brian. Brian, is a machine. I on the other hand, am easily distracted. I'm the team lead, but over here that's a job title that means you should still be programming the vast majority of your time.

As I mentioned in the last related post that made me :( I've been working on a lot of different stuff recently. Over the last 3-6 months I've done a lot on our Careers product (now Stack Overflow Jobs) alongside work with our internal tools team and with our marketing team. That's left very little time to work on fun new features for android, which sucks.

The changes that have been made in the Android app recently are just bug fixes (or incorporating new APIs), which is really a disservice to 100k+ active users of the app. I really want to work on new things in the app, but every second of free time I've found during which I've finally been able to open up Android Studio again, crashes and meta bug reports take higher priority over new features (as they should).

The obvious suggested solution here is to hire more people onto the team or get a full time Android dev, but that just doesn't fit into any of our goals right now. The majority of the company (and frequently, me included) are working on big new changes: Documentation, Teams, Jobs and Developer Story are all things that will hopefully change the future of our company, so it makes sense for all priorities to be based around them.

We might end up hiring another full time mobile developer later in 2016 (I really want to do an SO app that brings in all the new features we're adding in addition to our current SE app), but mobile is just not a company wide priority right now.

Hopefully that kind of explains what's going on, I definitely don't want passionate users of my baby and the reason I'm at this company to feel neglected, but it's been a really weird balancing act across my "roles" in the last few months.

If you have any questions please let me know, if you want a faster response feel free to ping me in the iOS Beta room.

Hi! Almost a year later. I woke up this morning to a push notification from this comment:

(Reason for unacceptance) We don't find reasonable action taken by SE yet after a year. – Pandya 6 hours ago

Since it's almost the end of 2016, and since I loved Gabe's year end wrap-up post on PT SO, let me try to fill you in on this year from my perspective.

We've been working on that. Here's what it looks like, from a mock-up*: 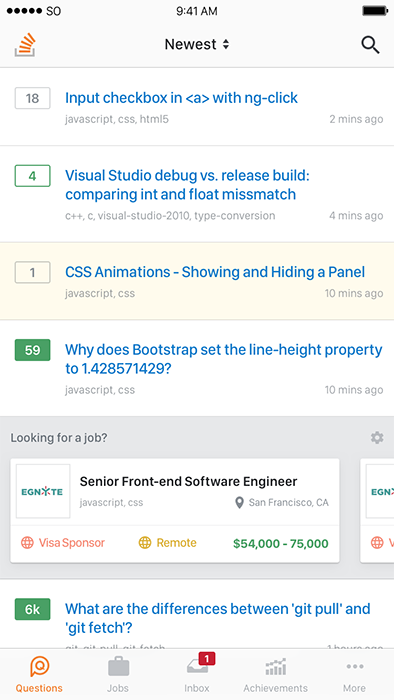 * I have an Android build. It is in alpha testing right now. I can't use it to take a picture for you right now despite trying for the last 30 minutes because our API has decided our office is making too many calls and rate limited it, so all the app's API calls die. Ugh.

I'm really excited about this app. We've been working on it for most of 2016. The first version should launch early 2017. Brian and I spent a lot of time before starting on the apps separating the "core" logic of the Stack Exchange app out from it, so that we can have a shared base for our SE and SO apps to live off. This means as we make improvements and add features to the SO app, some will directly transfer over to the SE app, some will require a little bit more work to work in both apps.

The main reason why I'm excited about the Stack Overflow app is that its presence helps align our company's current most important priorties and goals with what my team is doing.

When my team first started, our goal was to make a Stack Exchange application that transformed 9-5 Stack Overflow users into members of the wider Stack Exchange network at large. This was a very good goal for the time, and I think we made decent progress on it (and still are).

Currently, the majority of the goals of the company and the company's resources are being spent on the big features I discuss in the earlier version of this answer. Until we started working on the Stack Overflow app, Docs/Jobs/DevStory didn't have any sort of mobile story. We couldn't just jam a Stack Overflow only feature into a Stack Exchange app. They are beginning to have some mobile story now.

Before you ask "Why don't you just hire another Android dev"....

Obviously Stack Overflow isn't a dying company. We're doing pretty well. However, I have worked at many dying companies and one huge thing I learned throughout the process of seeing my start-ups run out of money and close doors is the idea of prioritization.

If my team sits down and makes the most polished best usable most features Stack Exchange application, does it really matter if it doesn't actually help move the needle on the company's major goals? If only ~10,000 people use it, when the website and mobile-web get 10x (at least) that? I'd kill for my baby having 10,000 unique users on iOS and Android each, if I was still at a tiny startup. At a company of this scale, it's a sign that we might be hunting down the wrong rabbit hole.

It definitely matters from the perspective of giving users the best experience possible. This is a very noble goal and one I really think I am doing a bad job of delivering on on Android right now.

It's very difficult for me to personally balance wanting to work on fun Android features and "I have to actually sit down and figure out if my team as an allocation of resources of the entire engineering staff is doing our part so that in our major goals the final outcome we can sit down and point at a % and say this is directly attributed to my team and outweights us being a % of the entire engineering staff".

Speaking less as PM more as a dev. FWIW the Android app has gotten some work done this year. We allow Google SmartLock login now, and I'm hoping our Android app can be a launch partner for some new Google APIs that I will talk more about once they are public.

Consider that the end of the post from the professional Team Lead Stack Overflow Employee Diamond Moderator on Meta perspective.

I understand that no matter what if I participate on Meta I will be participating as a Stack Overflow Employee, but if you'll allow me to speak a bit more personally...

So yeah. I hope I don't do another update on this post in 12 months explaining why we still haven't done anything on Android. I'm really hopeful that we're finally working on the right ideas, and not just the right ideas but the right and best-for-right-now-and-the-company-itself ideas.

Judging the tag page, there is still some activity. For example, on Nov 24th, Kasra, the lead on the app development team posted:

I just finished doing a complete overhaul of now drafts are saved/stored.

So there is some activity, but it seems that the developers have other priorities or find the app is 'good enough' to be usable. I am not a user of the Android app, so I can't judge its quality.

Comparing the ios-app tag page and the android-app tag page makes very clear that the emphasis is on the iOS app and not on the Android app. (44 answers on iOS, 2 on Android, mainly because of one very active iOS developer: Brian Nickel).

I think SOI is a little understaffed on the development team. It might be good to give more transparency about what is on the roadmap and what not, so the community knows what to expect.

Not the answer you're looking for? Browse other questions tagged discussion android-app .

39
Are more mobile app review or moderation features coming?
52
Please show hats in the Android app (aka android app hates hats)
72
Clearly communicate that the Stack Exchange Android App is no longer being developed
18
Clicking on a notification on Android app opens an empty feed
12
How do I make my post community-wiki using android app?
12
Development on the Android app seems ... kind of dead
6
Edit answer draft is broken
2
Stack Exchange offices around the world
3
Not receiving notifications on mobile
2
Search for existing questions asked by someone else
See more linked questions