This is the current progress towards the Curious badge, as appears in my profile: 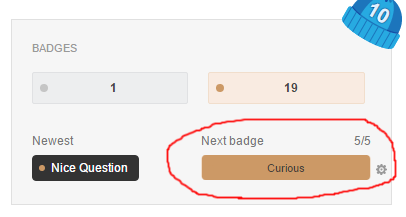 The curious, inquisitive, and socratic badge requires two conditions of completion to earn it.
The visual representation of it seems like it is only showing me one of the parameters of completion, and when clicking it does mention the other criterion isn't yet fulfilled: 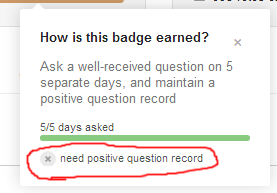 Can the bar be somehow divided up so that it shows both at the same time?

EDIT: Now it seems even buggier. Here's what I see: 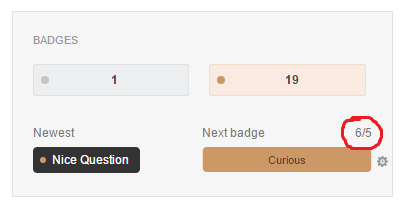 I agree as it is quite weird to see the bar full but the second requirement hasn't been met.

I feel like instead of having two separate bars, each requirement would be half of the bar. What I mean by that is that one-half of the bat will be filled for asking on five plus days and the other half by having a positive score. To know how close you are to the second criteria, there should be a second number shown, which is the difference between the user's current score and 0.5, the current limit to get the Curious badge or any of its successors (the silver and gold badge) according to this formula:

It could also be shown as a fraction type thing:

The formula would be included to make sure users understand what the numbers mean.

Not the answer you're looking for? Browse other questions tagged feature-request badges profile-page badge-progress .

12
Something exciting should happen when you reach 10K reputation
22
Can we do something more useful when new users land on a protected question?
52
Should we change the positive asking record criteria for the Curious badge set?
16
What makes a good badge? When and why should I suggest a new badge?
3
Always align "Next badge" to the right, even when there are no badges
12
Suggestions for improving the moderator flag overlay view
3
Curious badge display 3/5 instead of 4/5