“There are currently N bounties, worth X reputation” dynamic ad and the new sidebar width

You've probably seen this sidebar ad on one or more community-ads-enabled Stack Exchange sites over the years:

The image is dynamically generated from a non-officially SE app that uses the Stack Exchange API to fetch the bounties from a given site.

As far as I understand, the rendered image automatically scales to the allotted ad space - when the sidebar ads were 220x250, it would render in the sidebar as a 220x250 image while still looking quite oversized in the community-ads meta (as it does right here).

With the new 2016 campaign starting, can we test whether this awesome dynamic ad works with the new sidebar width?

The reason that specific width and heights (300x250, or 600x500 for retina) are asked for when providing community ads is to avoid squashing by images not suited for that aspect ratio.

See, for example, your image would look like this in a community ad: 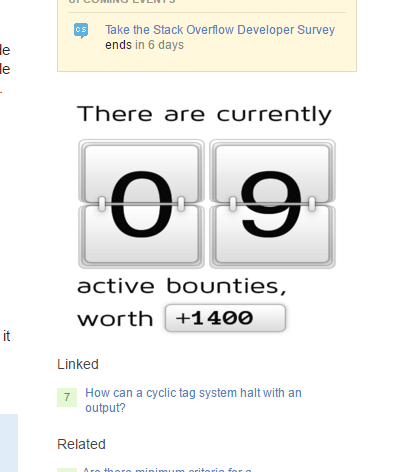 As to ask for the specific aspect ratio is so that it won't be squashed and instead of providing an aspect ratio, it'd be simply easier to provide a specific height and width to meet.

Not the answer you're looking for? Browse other questions tagged discussion advertising sidebar community-promotion-ads .

3
When will the dynamic “bounty” site ads update to the new size?
15
What's the official stance on the bounty ad?

8
“There are currently 0 active bounties”
226
We're standardizing the sidebar width at 300px on all sites
22
Please don't stretch the old community ads!
14
Images for Area51 proposal community promotion on imgur.com?
100
Why are the sidebar stats for a question now under the title?
2443
Firing mods and forced relicensing: is Stack Exchange still interested in cooperating with the community?
99
Stop misusing the blog sidebar and restrict the announcements tag of the blog to posts which are actually announcements of network-wide significance
304
Goodbye, Prettify. Hello highlight.js! Swapping out our Syntax Highlighter