Now that comment flags can be weeded out, can we show some flagging information in elections?

During moderator elections, a nomination includes certain statistics about the candidate. This information used to include the number of helpful flags, but this was removed because of concerns that comment flags were unbalancing this -- what we really care about, as I recall the discussion, is post flags, but we only had the one number. So "800 helpful flags (but 760 of them were comments, which we aren't telling you)" was deemed harmful and removed.

Since that decision, flag reporting has changed and flags on individual user pages are now broken down into categories: 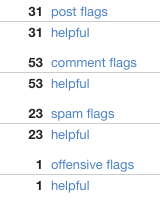 Could we expose that information somehow?

We could do this on the "election details" page (linked from the election page), like this (this is number helpful / number cast): 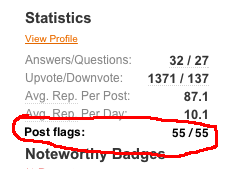 An alternative would be to report "flags" (not "post flags"), with the two numbers being posts and comments. This would lose the signal about flags that weren't accepted. I don't know which is more important.

79
Moderator nominees with records of vote fraud
31
Helpful flags count in election nomination
71
Comments on moderator nomination statements should be more visible in all stages of the election
41
Make moderator election questionnaire mandatory
53
Allow moderators to see a summary of flags against a user's comments
38
Exclude comment flags from the helpful flag count during moderator election
266
Let's disallow moderator nominations from people who've been suspended in the past year
417
Can a machine be taught to flag spam automatically?
53
Moderator Elections functionality: voting UI, commenting and flagging