What should I do when I feel some other Stack Exchange site would be a better location for someone else's question?

What should I do when I feel some other Stack Exchange site would be a better location for someone else's question? How can I do that so that the original poster doesn't mis-interpret my comments as encouraging "the wrong way" (manual copy-and-paste repost)?

Often people feel that some question would attract better answers if it were on some other Stack Exchange site.

Often we mention that other site in a comment under that question (as I did ).

Some people feel strongly that it's much better for a moderator to "migrate" a question to some specific Stack Exchange site rather than to manually re-post it to that site — Is cross-posting a question on multiple Stack Exchange sites permitted if the question is on-topic for each site?; What should be done when a question that is asked on two SE sites is found?; etc. Although there are apparently some situations where manually copy-and-pasting the question is somehow better than moderator migration: What if I think my question would be better on a different SO/SE site?.

What can I do to encourage people to migrate questions "the right way"? How can I start or participate in a discussion about which particular Stack Exchange site would be best for some particular question, without "encouraging reposting" by the original poster "the wrong way"?

Generally, if the question is on topic on both sites, it requires the OP to want to have it moved. The moderators of sites I use with overlapping content seem to be generally very strict about this. They're also usually pretty good about not trying to hold onto something that the OP wants to have moved. This means that it's really the OP's choice which site it "belongs" on.

First, I would strongly discourage you making this sort of comment unless you are very versed in the target site's policies and you know that it would be acceptable there. The first rule of migration is "Don't migrate crap"... and that means two things.

Both of these cases cause issues both between the mods of the two sites and, if the OP doesn't have an account on the target site, it makes for a very bad first impression.

Now, once you're certain that the question is clearly written, well formatted, and would be on topic on a target site, how you write the comment becomes important. As a member of Movies & TV, we often get questions about subjects that are very popular on Sci-Fi & Fantasy. In the past, comments on these questions have caused some very negative reactions and long Meta conversations. So, be sure to be considerate of the local site before composing your comment. No site likes to have their users' abilities to answer a question well impugned.

Additionally, there's nothing wrong with a user deleting a question and asking it somewhere else (provided they're still able) and, if a question is closed as off topic, there should be no reason to not repost it on the site where it is on topic. If they are unable to delete due to there being answers with upvotes, then migration is, of course, the better choice.

When composing a comment, I think it's important to consider actually telling the user (particularly if they are new) about the site policies, albeit briefly. Consider something like

If they mention in comments that they would like to migrate the question but can't figure out how, explain how the "flag for moderator attention" flag works and go on your way.

If you use the AutoReview Comments Script, you could even add it as a default so that you don't have to think about it much.

You could even edit it slightly to use it for questions that aren't on topic so that the OP doesn't just get their question closed when there's another site it would be perfectly acceptable on.

As a final note, as you've probably seen in the questions you've linked, if the OP can target their question for both sites to emphasize the site's topic in the question, they can post the question on both sites but this is very complex and can be difficult to explain.

this can be OK, so long as the question is tailored to each audience on the different sites and is materially different in each case. Just to be 100% clear, copy-pasting a question across sites with no changes is considered abusive behavor. – Jeff Atwood♦ Jan 15 '11 at 3:51

Ensure its a good fit - Some sites have a reputation for migrating crap. If you don't post there, you may not have an idea what's on topic and welcome there.

Suggest triage if it just needs some polish - comment or edit as needed so you migrate a better question, and suggest changes.

Vote or flag to close. If you must suggest a migration, make sure the process is clear on your comment, and that you suggest the user read the relevant help pages.

Just remember though, that not all questions have a home and sometimes its better to let it whither on the vine.

While commenting is nice, lots of those comments are counter-intuitive for a new user.

Your question on velveeta is a bad fit for mayonnaise.se. We do have a sister site called cheese.se which may be a better place for your question. You might want to narrow your scope somewhat - and edit out the bits about pickles, and I've taken the liberty of fixing your spelling. cheese.se is not on our migration paths, so you may wish to flag it for migration instead once you've take a look at their help and have ensured its on topic.

We cover fixes that need to be, or have been made, the process of migration and how/where the OP has gone wrong.

If you don't want to get involved in a possible conflict that might not end well, simply flag and move on: 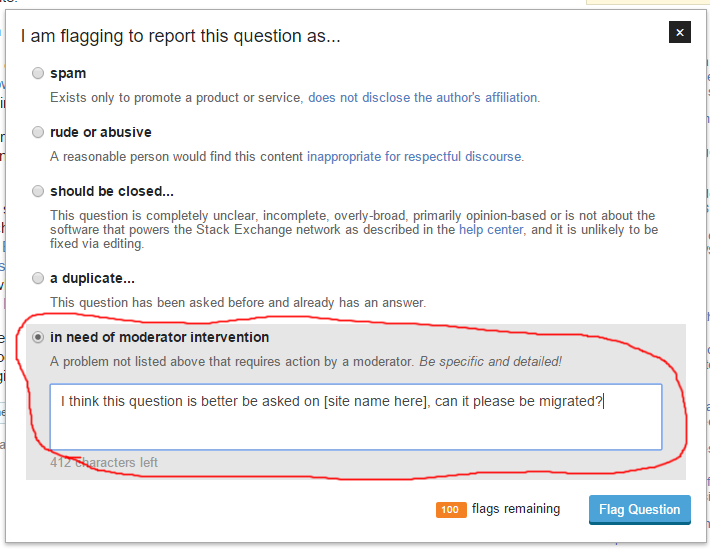 Flags are not visible to the OP. He/she won't know the question is flagged, and this might have two possible results:

Not the answer you're looking for? Browse other questions tagged discussion migration reposts .

443
Is cross-posting a question on multiple Stack Exchange sites permitted if the question is on-topic for each site?
20
“Belongs on” comments
23
How to discourage people encouraging reposting?
3
What should be done when a question that is asked on two SE sites is found?
1
What if I think my question would be better on a different SO/SE site?

1088
Are there any clones/alternatives for running a Stack Exchange style Q&A site?
1445
Fastest Gun in the West Problem
1802
Could we please be a bit nicer to new users?
443
Is cross-posting a question on multiple Stack Exchange sites permitted if the question is on-topic for each site?
435
Should Stack Exchange in general be awarding “A”s for Effort?
2778
A Terms of Service update restricting companies that scrape your profile information without your permission
827
Net Neutrality and Stack Overflow / Stack Exchange
2435
Firing mods and forced relicensing: is Stack Exchange still interested in cooperating with the community?
2114
Stack Overflow is doing me ongoing harm; it's time to fix it!
569
Change in roles for Jon Ericson (leaving SE)