Somewhat recently (as in the few days), the flag history summary became extremely slow on Stack Overflow (direct link to mine for devs), and proportionately longer on other sites: 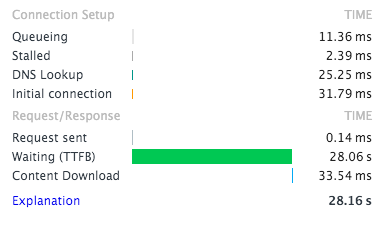 On SR, I saw a 700ms load time - roughly proportional to the number of flags I have there. I also saw higher than average load times on Drupal.

There's speculation that it's a nightly job running, slowing things down... but I'd still call that a bug, or at least worth looking in to.

bug flag-history performance
Share
Improve this question
edited May 23 '17 at 12:35

60
Where can I see my flag count / history?
12
Long load times on 10K tools ("flagged posts")
9
Flag history shows different formatting for answers and questions
12
Wording of the title and heading of flag history page
26
Flag message showing as "removed during a deletion" in the flag history