Since Feb, 3rd when I type an answer, things in MathJax don't get rendered in the preview. What's going on?

The issue was particularly annoying when editing this answer.

I have seen at least one other report here also without a solution or fix so far.

Assuming it is not me making the mistakes, can this bug be looked at? 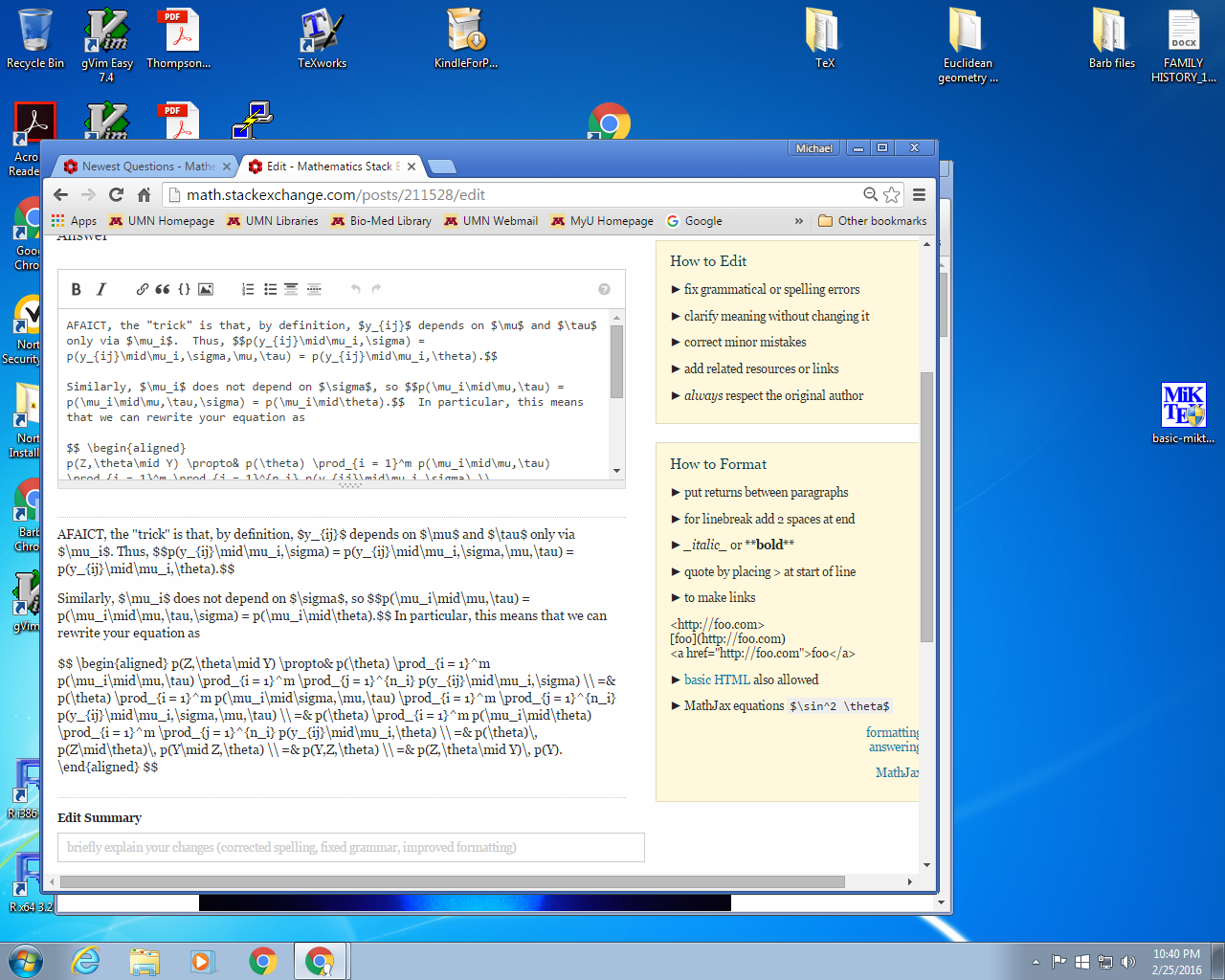 Based on some investigation, I've managed to come up with a somewhat reliable way to reproduce this bug:

Also, it seems that the error message logged to the dev console is actually a secondary error, triggered while MathJax is trying to emit an earlier error message. However, both the primary and the secondary errors seem to have the same underlying cause: MathJax is trying to insert something before a script element that has been removed from the DOM, and therefore has no parent node.

Alas, I haven't really been able to diagnose this much further. I can pinpoint the locations where the errors occur: the secondary one happens in here in MathJax.Hub.formatError(), while the primary error seem to occur here in MathJax.Extension["fast-preview"].Preview(). In both cases, the statement that throws the error looks something like:

where script.parentNode is null, presumably because the script element has been removed from the DOM. What I haven't managed to figure out, however, is why MathJax is trying to insert something before a removed DOM element.

My guess is that, somehow, repeatedly updating the edit preview with a lot of complex MathJax formulas in it causes a new math processing pass to start before the previous one has properly finished. AFAIK, MathJax should be preventing this from happening, as long as the Typeset calls are properly queued, but for some reason this mechanism doesn't seem to be working. :(

There's nothing to work on; the problem hasn't been consistently reproduced.

I'm sure that doesn't make you feel any better, and I wish I could help... But it's hard to fix a problem if you don't know what causes it or how to make it happen.

There are countless problems like this caused by folks with flaky network connections, old browsers, sketchy add-ons, Safari, or just plain bad luck. It's unfortunate, but such is life.

To improve the chances of a problem being identified and fixed, when reporting a bug please try to describe it in a way that makes it easy for readers reproduce:

If there's a visual anomaly associated with the bug, then post a screenshot, circling the portion that offends you. Applying a tasteful drop-shadow to your screenshot is optional; drawing the circles freehand is mandatory.

If your bug is only when you're using a beta browser, though, be aware they're not supported. Get a production browser and report back only if it's broken there too.

Not the answer you're looking for? Browse other questions tagged bug mathjax .

5
Microsoft Edge browser can't display certain SE pages and sometimes abruptly exits when editing, but apparently only when involving MathJax
13
MathJax \newcommand in question titles is incorrectly scoped to the entire page, unlike in posts and comments