Suggestion, change "This Type of Flag" to something less ambiguous

A constant source of confusion is the wording on the menu for flagging a question or answer.

In 2013 it seems it was first changed from this flag to this type of flag (Duplicate flag lists "you have already raised this flag" after flagging as "Unclear what you're asking" ), but that is still not enough, based on the number of questions here on Meta.SE and on individual stacks' metas regarding it.

Recently on M&TV for example: Why is it telling me that I flagged a question as a duplicate when I didn't?

This type of flag can be read as THIS type of flag, or this TYPE of flag. Obviously the implied meaning is the latter, but many people think its the former.

You have already raised a similar type of flag.

Change this to a similar would be specific enough to let people know it doesn't mean that specific type of flag, just a generally similar type.

A wordier version would have both, this or a similar.

This appears to be status-completed as the flag dialog now unambiguously shows you the type of flag that you have raised. 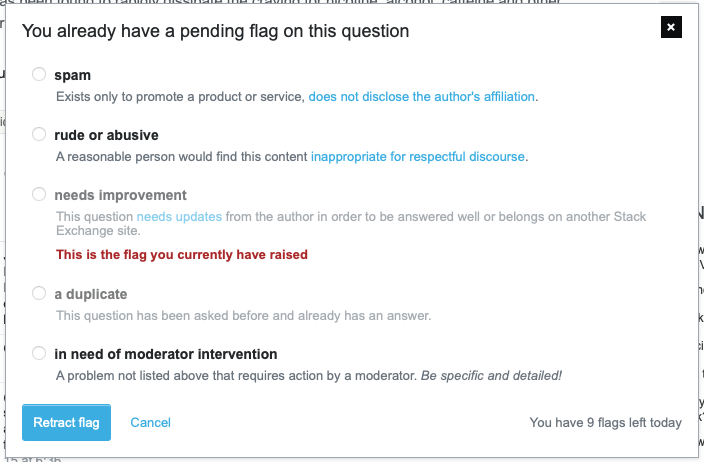 Not the answer you're looking for? Browse other questions tagged feature-request status-completed flags wording .