From the app's about section:

This is the beta version of the official Stack Exchange Android app. 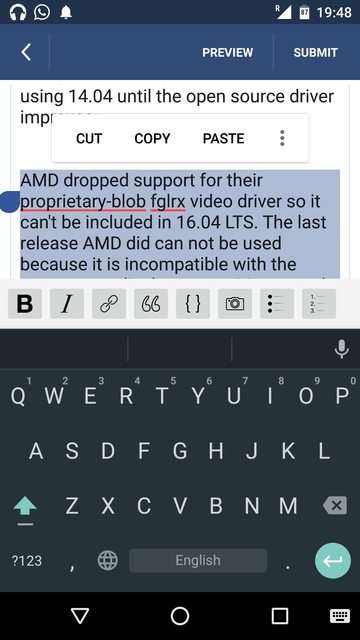 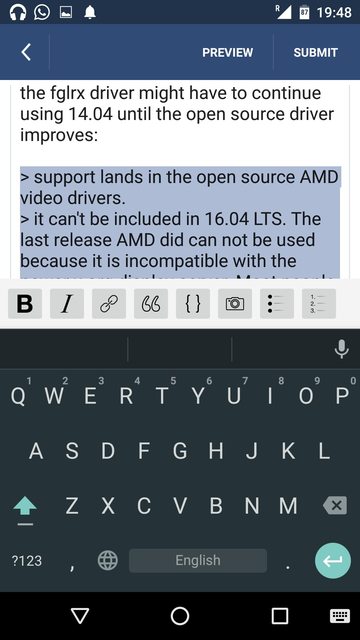 Note that I manually edited the Markdown for each image so that it pointed to the large thumbnail and linked to the original. I had to do that since the 1080×1920 screenshots are way too large on a desktop. I think there's already a feature request for that somewhere here.

Selecting text within a paragraph, leaving out the leading words in the first line and trailing words in the second line creates a code block, instead of inline (backtick-surrounded) code span: 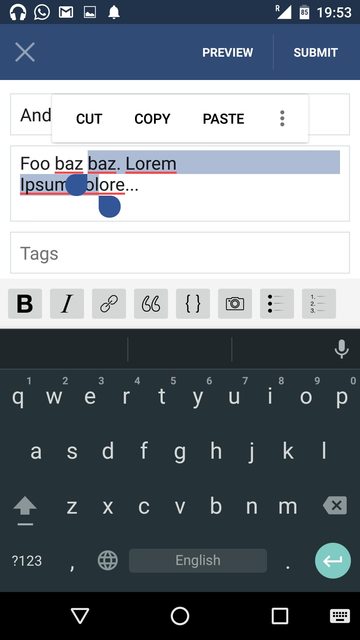 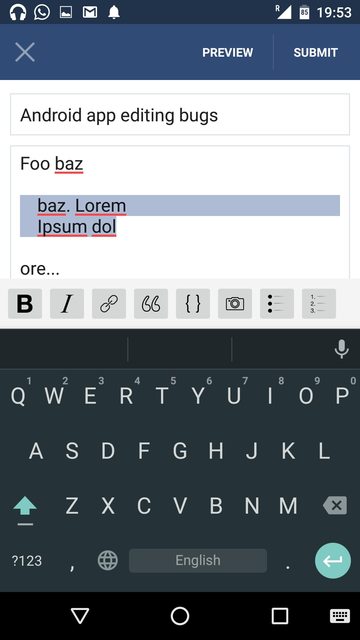 This also happens when the selection is in the same line, but I'm not sure how reproducible it is. Sometimes even a single word can become a code block, sometimes multiple-word selections are enclosed in backticks.

And, yes, each time I inserted these screenshots, the first image's Markdown and image link were altered. So, the first image became just a link that actually points to one of the later images. Since the original link to the first image is now lost as the editor replaced them with the link to a later one, I had to upload it again. (In the process, the second image's link numbers were altered, and the entire set of links at the bottom got their numbers decreased, so that the numbers were mismatched. After I noticed the links being changed, I starting copying the links before uploading new images, so I was able to quickly fix that.)

In this context, an undo button becomes necessary. Markdown becoming messed up as with the code blocks can be lived with, loss of data like in the block quote and image uploading situation is untenable. I've been observing the image upload and code formatting bugs for some time now (at least a month - my last couple of bug reports about the app also gave me trouble uploading images).

Just for kicks, here's one I screenshot I took while making my last bug report, which I just noticed I had taken and now have uploaded via the browser: 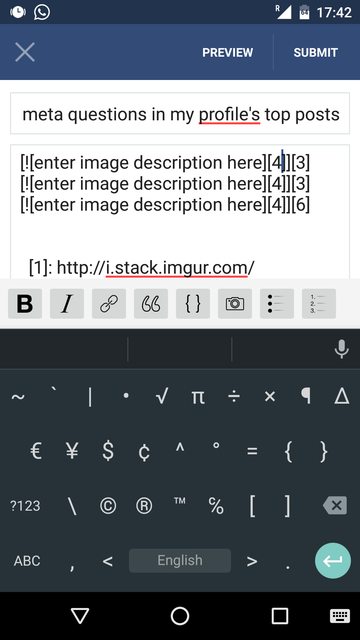 Block quotes is a duplicate of Blockquoting null? and will be fixed with 1.0.84.

Image and link replacement is a duplicate of App image uploader replaces previously-uploaded image Markdown with most recently-uploaded image URL and Android app replaces links and text after editing and will be fixed in 1.0.84.

An undo function is a duplicate of Please implement an undo-button in the edit-modus. Honestly, I can't believe Android doesn't have this built in. It's towards the top of my to-do list and I will hopefully tackle it next week.

The problem here was a bad regex matcher not identifying text or after the code if there was a line break. The issue stems from the fact Java's String.matches expects a total match, so the \S[ ]*\z prefix check was rewritten as .*\S[ ]*\z but . doesn't match newlines. Now the code is using Pattern.compile("\\S[ ]*\\z").matcher(before).find() which accepts partial matches and passes. Similar for text after the selection but the wrong variable was also being used there preventing it from working.

Not the answer you're looking for? Browse other questions tagged bug status-completed android-app editor .