The flag ban system does its calculations using the dates that flags are handled, not when they are cast. When at least 10 flags have been handled in the last 7 days, if more than 25% of those flags are declined, you're not able to cast any flags.

This causes a dire-looking banner to appear above one's flag summary linking to flags "declined in the last 7 days", i.e., those that have caused the ban. Which looked like this in my case, on the 24th of March: 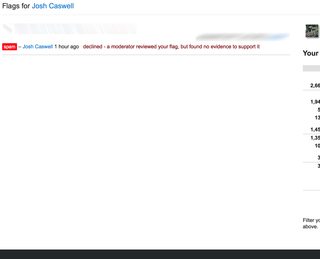 Only one flag listed there, which shouldn't be enough to trigger a ban. This was extremely confusing, and led me to wonder if there was a manual ban that had been applied to me. I can't find any mention of such a feature, though.

There are tooltips on the "results" field of handled flags, showing the resolution date, so I tried counting manually and eventually found that indeed I had 2 other declined flags in the previous 7-day span:

I didn't know until looking into this even further that I can see handled flags by category, ordered by handling date. So I can easily find these two flags, but N.B. that the spam flag that triggered the ban is not listed with them, which are categorized separately under "post flags". There's no filter view that shows me these three together.

This is confusing and frustrating,* but easily fixable. The link that tells me it's showing me flags "declined in the last 7 days", which is what I need to know, should just show exactly what it says.

Right now it appears to display flags cast in the last 7 days, that were declined. Not the same thing, much less useful, and importantly, not its apparent intention (thus I've tagged this as a "bug").

*With 54 flags declined of 2,708 cast, I tend to think of myself as generally being useful when flagging, and I couldn't really understand why my flags were suddenly deemed not so.

Yep, the query for declined flags contributing to a flag ban was using the flag creation date instead of the flag decline date.

Not the answer you're looking for? Browse other questions tagged bug status-completed declined-flags flag-history flag-ban .

40
Can we make new flag responses more visible?
9
Will moderators decline flags that they think should have been retracted?
18
Your last flag was declined - no it wasn't
9
Tweak the math for the new flag-ban system a little?

295
Enable automatic deletion of old, unanswered, zero-score questions after a year?
191
Allow moderators to reply to a flag
157
Allow recovery from flag hellban
303
Moderators should be able to manually ban users from suggesting edits
47
Guaranteed flag-ban after a series of helpful flags
41
Community-declined close vote flags should point to the review that declined them
70
Explicitly mention who decided the fate of a flag
21
Add a link to the relevant Meta post in the flag ban notice