I wonder if there is such a query on stack exchange data explorer queries, similar to this one on user base who cast the most downvotes.

The following query shows the ratio's:

The user you pointed out isn't even close to the top spot of this downvote/upvote ratio list, and I don't think it is a bad thing to be at the top here. I'm obviously slacking.

Eric Lippert can have the badge, as he states:

I reject the notion that a ratio is a valid measure. My intention was to have zero upvotes; I was trying to clear a downvote and accidentally upvoted. Second, I reject the notion that this makes me the worst of anything. Downvoting adds far more value to this site than upvoting. I have reviewed literally hundreds of thousands of questions and answers for free, and identifying the stinkers that make the world worse is a valuable service 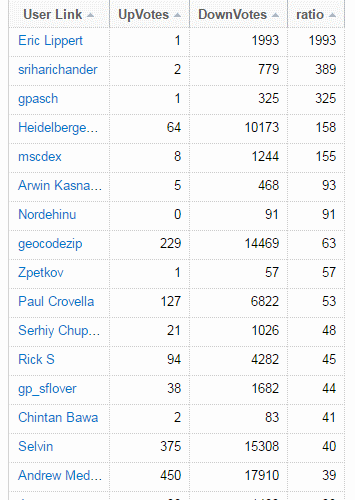 I think moderation towards quality is a positive behavior and down voting is certainly a good tool to signal any quality issues to both the OP and visitors of the post. If there should be such a badge it should be awarded for a substantial number of votes and the down vote ratio is above 10.

Not the answer you're looking for? Browse other questions tagged discussion feature-request voting down-votes data-explorer .

39
A badge that rewards “prophetic” downvoting
159
What is the purpose of the tumbleweed badge?

1183
Encouraging people to explain downvotes
1102
Are there any clones/alternatives for running a Stack Exchange style Q&A site?
341
Database schema documentation for the public data dump and SEDE
903
Why aren't people voting for questions?
1808
Could we please be a bit nicer to new users?
1228
Don't throw away all votes when a user is deleted
2780
A Terms of Service update restricting companies that scrape your profile information without your permission
2443
Firing mods and forced relicensing: is Stack Exchange still interested in cooperating with the community?
2140
Stack Overflow is doing me ongoing harm; it's time to fix it!
1537
Thank you, Shog9