When a moderator sends a message to a user, the message and all followup are available in the moderation tools. When a moderator contacts a CM through the site, on the other hand, the contact is recorded (good) but the response is via email to the moderator who made the request. This makes it harder for other moderators to track, and makes it hard for anybody to look up the results if they're needed later. Using an annotation to record the response doesn't feel quite right, but messages shared in moderator chat rooms can be hard to find later.

I'd like to see message history for CM contacts that is similar to the message history for user contacts. (It should be linked in the same place.) I'm guessing that the CM responses are being sent from a management tool external to the particular SE site, so I don't know how hard this integration would be. User responses via email end up in the history if I understand correctly, so I'm hoping there's something to hook into for CM responses via email.

We're rolling out some changes to how these work. Aside from improvements to the way these appear in the users' histories, when clicking on the "mod" menu on a user's profile and selecting the "contact community team" option, you'll now see the following in place of the input box you used to see: 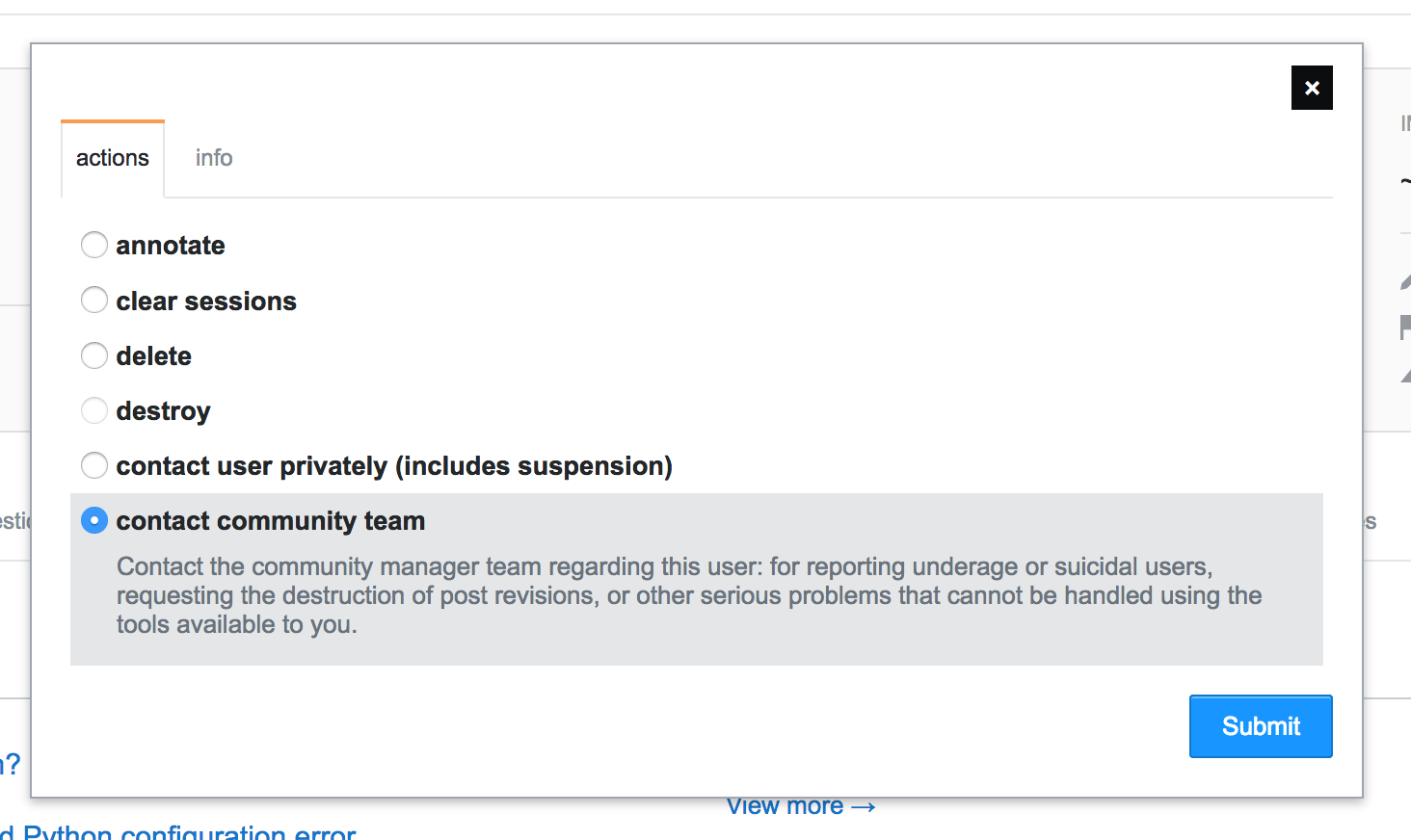 Hitting submit there will take you to a page similar to the ones you see when contacting a user, where you'll be prompted to chose between a few pre-filled options: 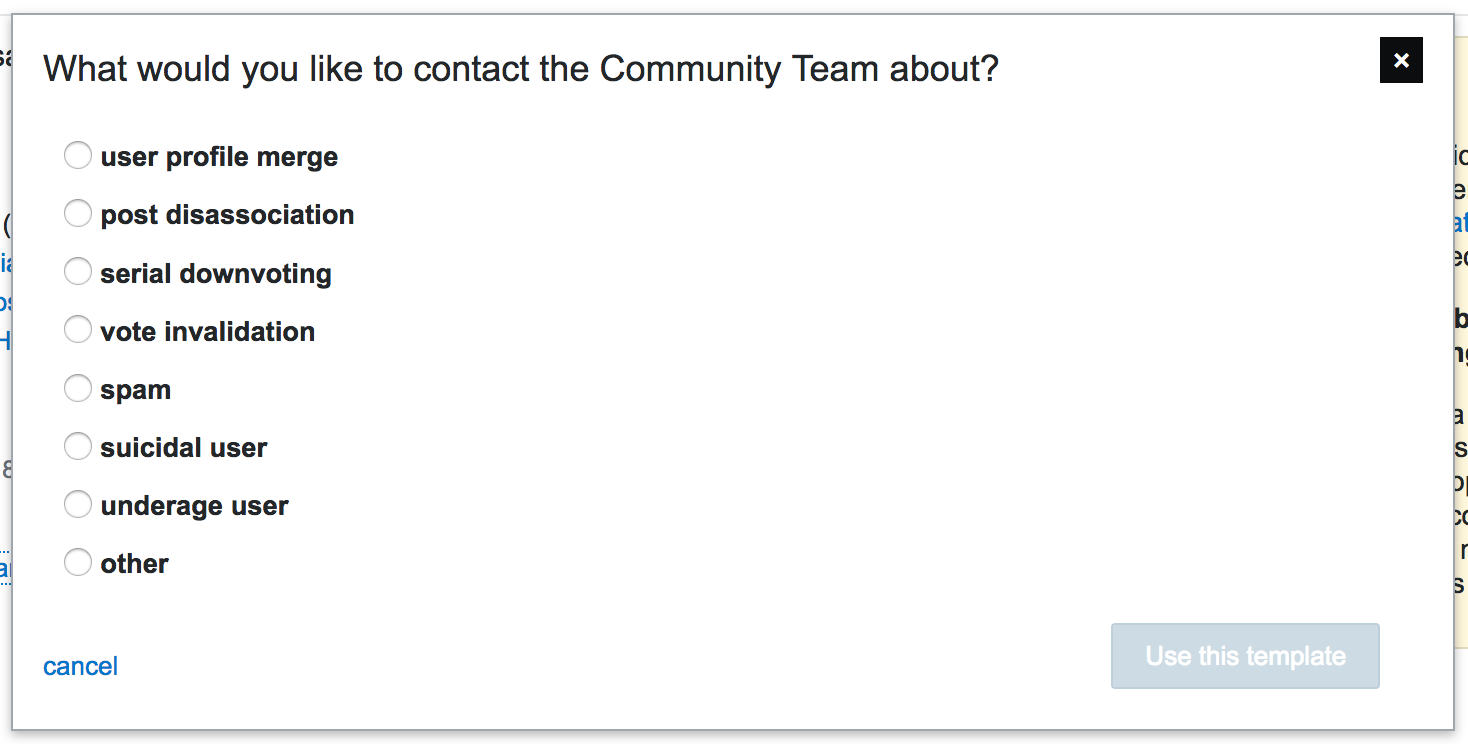 Choosing either of those will expand a minor explanation for when each should be used (they're pretty self-explanatory, but there it is :P ). After choosing one of those and hitting "choose this template," you'll see a text box automatically filled, and be able to include whichever links and explanations you feel are needed to assess the situation being escalated. The template's there to try to make your lives easier and allow you to just paste a link or two in most cases, instead of having to type a lot of stuff in — meaning you can spend those valuable seconds/minutes doing other stuff instead :P If there's more stuff you need to add in, though, please do so.

If we reply back, then, here's how it'll look: 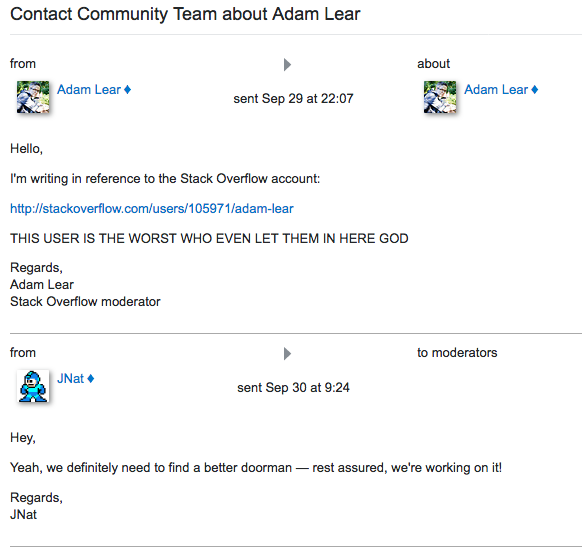 Pretty much like mod messages do at the moment. Furthermore, the diamond inbox will also include these now: 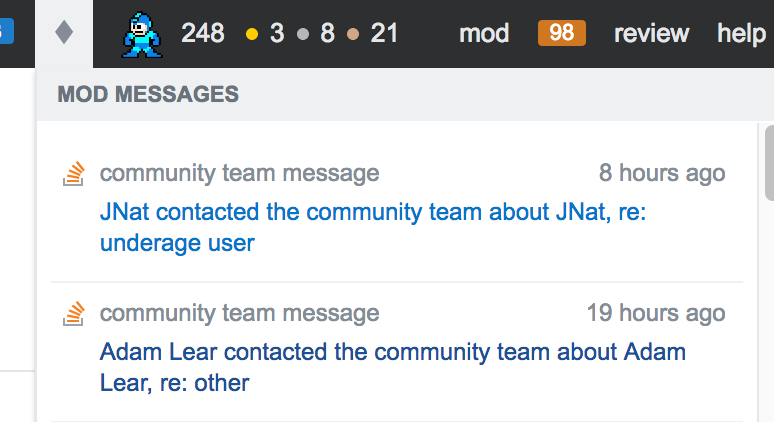 This is a first stab at this, so let us know if anything looks weird or if there are any other improvements we could be making to these.

131
CM escalations - How we got the queue back down to zero
112
Can we have a moderator only "flag for community team/developer attention" link on posts?
45
We expect some Q3 projects to be delayed
22
Can CM pings show up the same way annotations do?

248
Please show us when we lose an accepted answer
205
Avoid the Streisand Effect - be clear about the reason when suspending an account
139
Can we have drafts for moderator messages?
13
Display moderator messages in the global inbox, not as a site-only dropdown
11
Moderator messages that do not "taint" the user's account
77
Give moderators the ability to mark reviews as "bad"
277
Make moderator messages anonymous
93
Community deletion of comments should raise a moderator flag