Recently MSE experienced terrible flood of outright off-topic debugging questions. I would like to learn more about users asking these questions.

Specifically, I would want to find out how many of these askers were banned or warned or somehow else asking limited at Stack Overflow.

I expect these stats to help understand if maybe current MSE guidance (including flashing system banner) is insufficient to help new users understand site topics or maybe some (most?) of of them are simply desperate and determined to ask their question wherever possible no matter what.

Approach to get requested statistics has been explained and used in answers to similar statistics request at Programmers meta:

Below screen shot shows example of questions I wonder about: 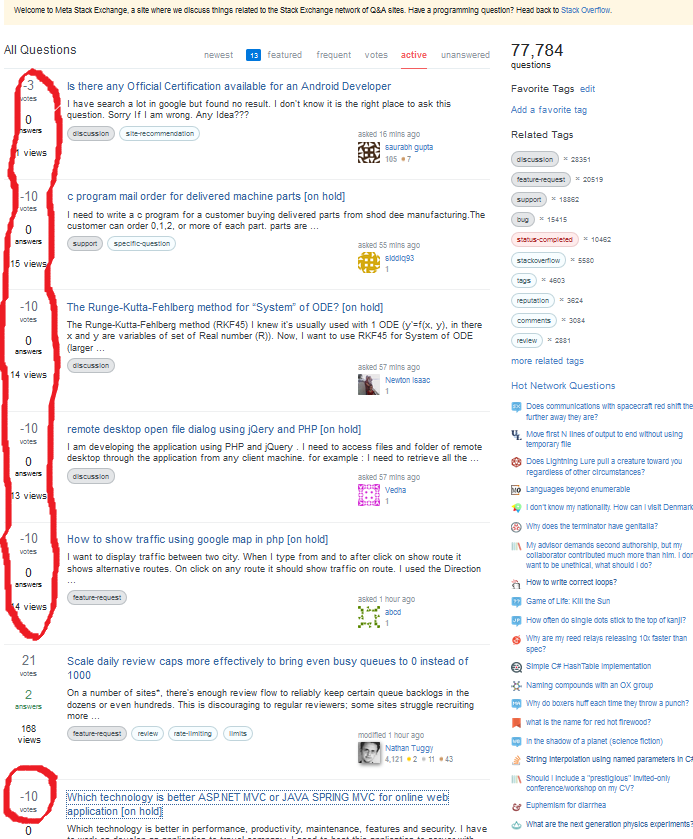 You see, askers of these questions seem to ignore the prominent banner that refers them to more appropriate site - "Have a programming question? Head back to Stack Overflow" - as if they desperately want to try their luck no matter what.

They don't delete questions even when these are closed and heavily downvoted - as if they desperately hope to have them answered at least in comments while question is still visible.

Or maybe above is wrong impression and these askers are regular legitimate users who just did not realise that this site is not Stack Overflow. Without stats it's only a blind guess.

The Terms of Service inbox notification hit the inbox on April 19th, so I ran some numbers since that date to hopefully answer your questions.

Comparing it to the rest of the questions asked:

While the site was inundated with off-topic questions, only 9% of the users asking had hit a block on Stack Overflow at some point in the last 30 days. I don't think the problem was because of users hitting a block, I'd guess it mostly came from users not realizing they went to a different site when they read the updated Terms of Service.

It's definitely something we need to think about in the future when we send inbox notifications to the entire network of users.

Not the answer you're looking for? Browse other questions tagged support stack-overflow meta off-topic statistics .

2780
A Terms of Service update restricting companies that scrape your profile information without your permission
82
Block migration if user is suspended/question-blocked at destination
94
A way for "new users" to ask about their post specifically
35
Sudden increase in off-topic posts on MSE
42
Ways to give users some specific education about question quality and topicality
45
What is the cause of the recent increase in blatantly off-topic posts on Meta?
21
Users with 1 rep can't view any questions here on MSE
-1
Require having a few reputation on at least one other site before posting to MSE
2
Should we have a tag for questions involving new users asking blatantly off-topic questions here on MSE?
2
Why can't I start answering questions?
See more linked questions

26
Where do first visitors on Meta Stack Overflow come from?
250
The homework tag is now officially deprecated
17
Some custom off-topic close reasons don't really describe off-topic questions
177
Shouldn't "off-topic" be only about... off-topic?
325
Stack Overflow is getting a Meta of its own
89
New 10K tool: question close statistics
155
Spam Profiles are getting my goat. Could we have better tools for mods to deal with profile spam?
166
What are the effective communication channels for effecting change to SE?