Users with 1 rep can't view any questions here on MSE

Trying to view questions with a 1 rep sock I have resulted in the Something Bad Happened: 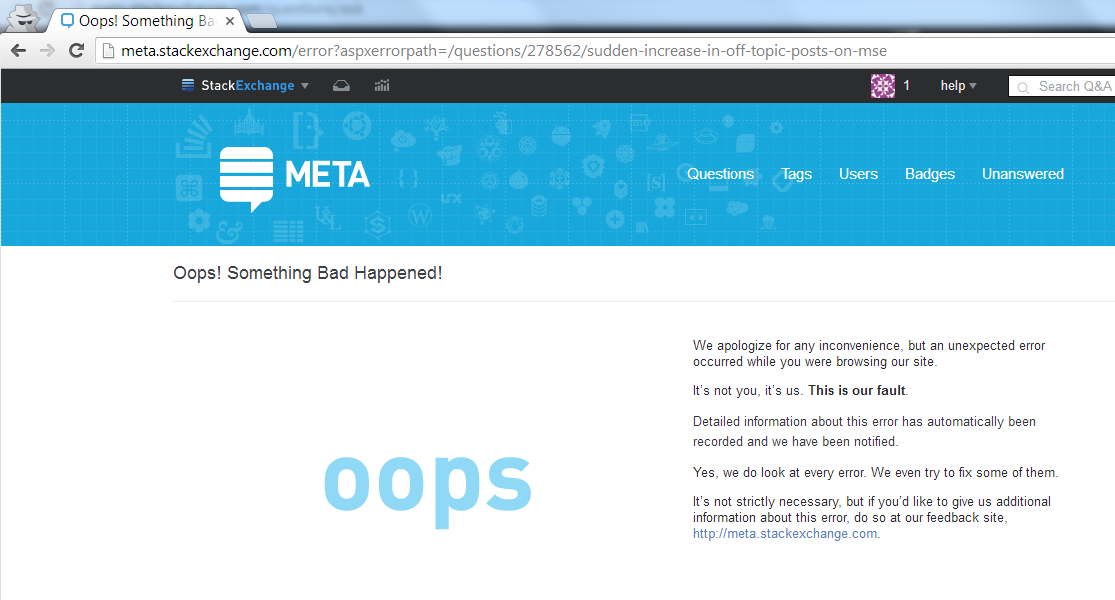 Viewing questions while logged out (as anonymous visitor) works fine. Going to Ask Question page, I see the expected "You must have at least 2 reputation to ask a question." message due to this change in settings.

Long story short, pushing an inbox notification for a post here on MSE has brought in a lot of folks who don't normally visit this site. Which is good... Except that a whole lot of people don't realize they aren't on Stack Overflow anymore.

This is mildly annoying for us (employees) to deal with, and of course a terrible experience for folks who might otherwise be learning something about how this network of sites is governed. So last night, in hope of reducing some stress, I raised the reputation required to post from the default 1 to 2...

...Which had zero effect on anything because that setting has never been changed for anything but child meta sites before, and the code made a few crucial assumptions along those lines.

So a little bit ago, Nick decided to actually make it work by removing one of those (no-longer-correct) assumptions. Which worked! Hooray!

...but then put us face-first into another set of assumptions which involved dereferencing pointers to a parent site that simply doesn't exist here on good ol' Exceptional Meta.

This too is now fixed. For the next day or so, we'll keep the reputation required to post here at 2, thus requiring anyone wishing to participate here to have earned some reputation first (via edits or previous posts) or at least have earned the association bonus somewhere on the network. That oughta allow those of you who are new to the site to poke around and learn about what we do here without suffering the humiliation of mistaking it for Stack Overflow and posting your programming questions only to see them downvoted and unceremoniously deleted.

Once this... Unplanned mass initiation... Has passed, we'll drop the privilege back to its former value and go back to business as usual. And maybe think of a slightly more clever solution next time we need to push a post into everyone's inbox.

Not the answer you're looking for? Browse other questions tagged bug status-completed meta .

35
Sudden increase in off-topic posts on MSE
11
Statistics regarding users who recently flooded MSE with blatantly off-topic debugging questions
5
Should we update the TOS post with a banner to point clueless users at SO for their programming questions?
6
Ask page gives error for 1 rep users
2
Why can't I start answering questions?
1
Could the iOS app for SE have a setting to use 1Password browser for links? It has that option for Chrome already

48
View *my* deleted question and answer with less than 10K
67
Improve "Protected Question" message with regard to rep gained through Association Bonus
332
Stack Overflow is getting a Meta of its own
185
Change rep required to downvote on MSE
7
Users can post questions in MSE with 1 reputation, probably via the app
207
What is so bad about "Nancy"?