Can we add some friction for exploding comment threads?

One of my sites has a long-standing comment problem. When a CM collected stats for us in 2014, 2.1% of our posts had more than 50 comments. That's absurd, and the problem has continued. Moderators spend way too much time dealing with comments and flags on comments and complaints on meta about deleted comments and sniping about comments in other comments... for a second-class feature, comments sure do cause a lot of work. We haven't been able to bring about a cultural change yet; can we add some friction?

The answer isn't to prevent comments because, while some people love to use comments for tangents, arguments, jokes, and long-winded discussions, comments do still serve a purpose. We also get the good kind, the ones that seek clarification or otherwise try to improve a post. And that's why we don't just purge threads wholesale; we need to preserve those ones if they're not yet obsolete. We want the good comments; we just want fewer of the others.

Instead of cleaning up the problems afterward, it would be great if we had some way to impede some of those comment explosions in the first place, on sites where this is a problem. How can we do that? I can think of a few possibilities:

Would any of these work? What else could be done to address this problem? (I now see that I made a couple more quasi-suggestions elsewhere a while back.)

This question arises from one site, but I've seen comment explosions that could benefit from some throttling on other sites too, so it's not only one site's problem. I'm looking for something that sites could opt into, not something that would be mandatory across all of SE.

On every single site on the entire Internet except here, comments are intended to discuss things, provide personal opinions, argue with others, etc. A "comment" invites discussion by its very nature.

Except on Stack Exchange.

This drives me nuts, because I have a background in Human Computer Interaction/UX design and this problem exists fundamentally because of bad UX design.

Taking a wildly understood affordance for one thing (discussing/opining) and then changing the actual meaning will cause problems. Because it's really bad HCI and UX. I encourage people to read through The Design of Everyday Things or at least the wiki synopsis as it really helps avoid problems like this. Misusing designs with clear affordances causes all manner of problems.

It's the site design equivalent of a door like this being used for "pull:" 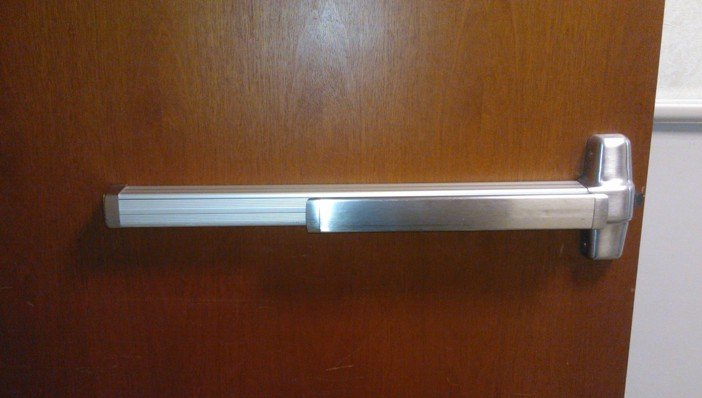 Nearly everyone would see a door like that and push on it. If the door is actually a door you are supposed to pull, is it the users fault or the fact that the door designer was an idiot and decided to override the basic functionality and intent of something everyone understands?

Realize that the way Stack Exchange uses comments is exactly like this door example. Nearly every single door like the above functions as push (just like how comments are used on the Internet). Is it really a surprise people try to push the door and are annoyed when they find out it's a pull door?

Maybe that example is too subtle (we don't label the door pull afterall!). What about this? 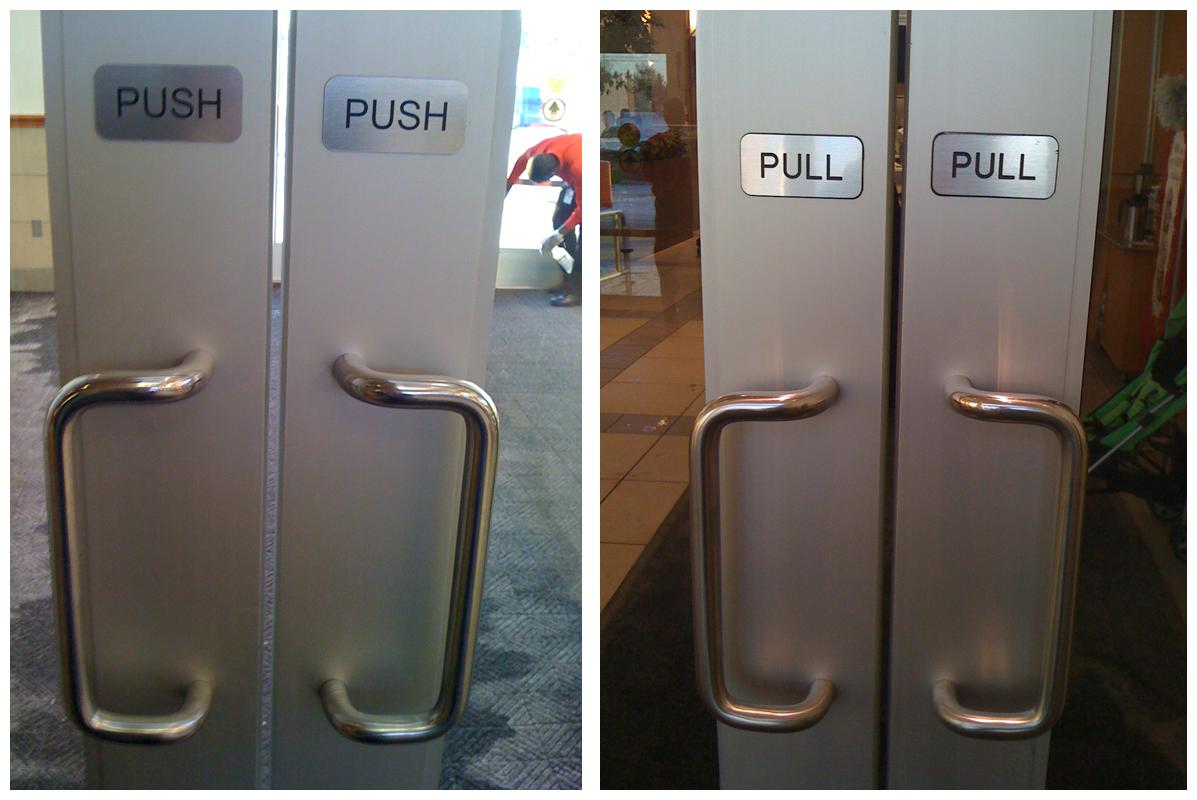 When you use an affordance incorrectly you have to make all sorts of workarounds to tell people how it is supposed to be used.

The correct way to resolve this is to scrap the idea of "comments" entirely on non-meta sites (oh right, not only does SE have this affordance problem but it's not even consistent with _itself). Make two buttons, "Request Clarification" and "Suggest improvement" and only allow the OP to respond. Or otherwise nix the idea of "commenting."

An idea that combines #1 and #3 (since you asked for further suggestions): limit each person to 3 (or perhaps 2) undeleted comments on a post at any time, except for the poster. That cuts off long discussion threads in their early stages, without much limiting the ability to request clarifications or suggest improvements: when the poster responds to your comment, you can delete it, which frees up a "slot" for you to make another suggestion.

This doesn't solve the whole problem, of course; there are still cases where a whole lot of people contribute to a discussion and you get 15 or 20 comments without more than 3 being from any one person. The door is still open for some other measure to address that case. It is also possible that two people can keep a rotating buffer of the last 4 or 6 messages of their ongoing discussion, but at that point it just seems silly not to move to chat, and honestly, if they're deleting their comments as they go is it really that bad?

Personally, I would also be in favor of automatically deleting (almost) all comments after a week, but I think it's been established that I'm in the minority there.

In most cases the problems could be nipped in the bud if there was a penalty for abuse of the comments. Right now comments are used to avoid the risk of down-votes and the work of creating a real answer far to often. These are probably half of the comments that tend to spawn chatter. The other half are disagreements of opinion.

This would give mods a method that simply restricts abusers ability to create and modify comments this would not inhibit their ability to create answers, questions, or vote which are the core functions of the site; then the site will continue to generate good content with out the comment noise.

Part of the problem is not that people do not know better, but rather that as long as it stays mostly civil there is going to be no penalty for breaking the rules. This would give a tool to mods that is more slap on the wrist and less ban hammer. Of course the ban hammer(site suspension) is still avialable for when the slap on the wrist is not nearly enough.

I would caution that any solutions don't create problems worse than the problems they solve. The comments section is going to require human eyes to maintain it regardless if for no other reason than to slap down the occasional spammer.

Yes, there's nonsense in the comments, but sometimes that nonsense makes this site look like something more interesting than a technical manual. It reminds me of what Ben Franklin wrote "make something foolproof, and only a fool will use it".

As to the question above, here are some problems I see:

In general, all of the solutions proposed will have a few problems such as that spammers can still sneak in, insults can be dropped, et cetera, so they will not change the fact that human eyes need to give it a once over.

Specific problems I see for each:

If the comments contain a good deal of back and forth to improve a question or answer, is that a bad thing?

What's better, 15 meaningful comments or five spammers? ALL of the proposed solutions (including Shog's idea and David Z's only address volume and not quality. Address the quality issue and the quantity will take care of itself.

I say go back to creating a cultural change.

Those of us with higher reputations need to remind others and ourselves to behave in accordance with the intent of this site.

Here is a simple solution.

Make the comments only visible to those directly addressed and the op.

Give mods and the OP(with X rep) the ability to promote a comment to publicly visible.

Allow anyone with X rep to purge any comment directed at them. That has not been promoted to be publicly visible.

The only flags mods have to deal with now are inappropriate, and promote this Comment flags.

Finally make the add a comment privilege variable and every time a comment is flagged inappropriate that bar is raised to 5% more than current rep. This has the effect of a temporary comment mute and a penalty for misuing comments.

Ideally make this optional so that sites like The Workplace and Politics which have a high incidence of comment chatter can be turned on with out stymieing the entire network. I would also not implement this on Meta

Not the answer you're looking for? Browse other questions tagged discussion comments .

90
Propose a privilege to sit in the 500 reputation mark
184
Can we get a comments only lock?
55
For protected questions, require local reputation to comment
11
Can we have an easier way to set up a chat room from a post?
2
Provide an option for moderators to enable throttling of comments by requiring user to review prior ones
-16
Limit number of comments per user per post

1210
Encouraging people to explain downvotes
914
Why aren't people voting for questions?
1476
Fastest Gun in the West Problem
1832
Could we please be a bit nicer to new users?
594
Exit strategies for "chameleon questions"
718
Your answer is in another castle: when is an answer not an answer?
2784
A Terms of Service update restricting companies that scrape your profile information without your permission
827
Net Neutrality and Stack Overflow / Stack Exchange
2482
Firing mods and forced relicensing: is Stack Exchange still interested in cooperating with the community?
2223
Stack Overflow is doing me ongoing harm; it's time to fix it!