Custom tag styling (color) for a classification of tag?

Tags come in (essentially) three colors... and these three colors are limited to meta sites only.

As far as I know, all tags on a main site are the same color with the exception of the custom sponsored tags that some sites have, which have fun icons of the brand on them, like the Android tag on SO.

Some sites (not many, but some) have very specific types of tags. For example, on Movies & TV, we have tags for film titles, Sci-Fi and Fantasy has tags for titles, authors, etc… Anime & Manga is similar.

Occasionally, on M&TV, we get users (usually 1 rep) who use generic-looking tags like aliens to ask questions about… well… aliens in films… but the Aliens tag, as the tag wiki notes, is for questions about the film Aliens. Sometimes, if these tags are for less-well-known films or were recently added, they don't have excerpts at all… this, obviously, is a separate issue.

To add to the title specific uses above, this request was recently made here on Meta.SE:

Some SE sites have questions that apply only to certain countries, or where answers should at least take laws or customs in the country in question into account. Example SE sites would be Workplace, Academia, Expats, Travel, Money or Law. These sites use country tags for this purpose.

Changing the color of the group of tags would be a less intrusive solution to the request to add tiny flags to identify country tags (and it would be less work). The tags already have the country name on them, so all that is needed to set them apart visibly is a different color of tag (one color for all country tags, not one color per country). This would make all of the country tags on a site more visible while not interfering or watering down Stack Exchange's ability to sell the icons to interested parties.

What I would like to propose is a specialized type of tag denoted with a different color that allows sites to do a couple of things:

There are certainly other benefits that I'm missing above.

To help implement these tags correctly, I recommend that the creation/reclassification of new tags should be initially limited to either mods or sufficiently high-rep users (10K+). For established sites, this will be quite an endeavor at the outset as there are likely hundreds of tags that will need to be classified.

As one would expect, this is something that should be implemented on a per-site basis and be something that the site has to show a particular need for and community support of before it is allowed.

As a note, on M&TV we have recommended a plan to set film and TV tags apart by including the year of first release in the tag but this plan is on hold due to the issue with film/show title length often conflicting with the 25-character limit for tags.

Note, I am not asking to Allow custom colorization of tags, which relates to a user-setting to mark favorite tags.

When the subject came up on Workplace one proposal was to use the styling that, on meta, is used for mandatory tags (choose at least one of these four). I objected to that proposal because we don't want the UI to suggest to users that they must use one of these tags; some questions don't require it.

However, the red moderator tags that you brought up are a good example. There is no requirement that a (meta) post have one from that set, and users are used to seeing different tag colors.

So I think having a single styling that is neither the color of meta mandatory tags nor the color of moderator-only tags would be valuable. This styling might be color (I don't know how hard that is to implement) or perhaps a bold outline or even just bold text. SE would need to enable the functionality; it would then be up to individual sites to populate the set of tags to get this treatment.

One way to implement this would be to add a new (moderator) tool on the mod -> links list: 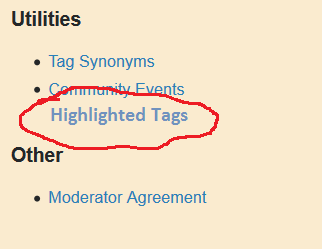 This would lead to an editor -- like for posts, tag wikis, and mod messages -- like this, where tags could be typed in the usual markdown: 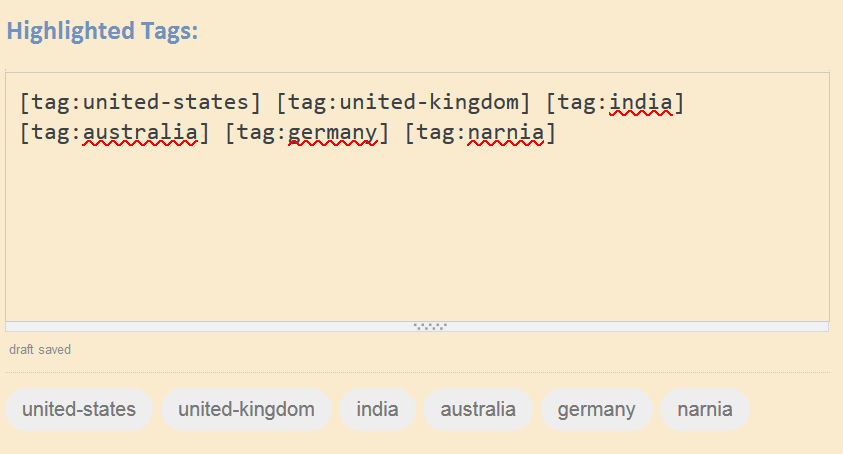 Anything typed here that is not a tag either would be ignored or would cause an error message on save, whichever is determined to be better. (Imagine there's a "save" button there that I forgot to include.)

There are at least two advantages of using markdown instead of just typing a list in plain text:

(Stretch goal: maybe this textbox could have the same validation that the "tags" list on a question does.)

I think we want moderators to designate which are the special tags, because tag categorization affects the whole site. (This logic has been given for why moderators alone control community events and editable help-center pages, and I suspect it applies to custom close reasons as well.) But moderators shouldn't have to do all the work; the community should decide, and once there's consensus we should make it easy for moderators to push the "go" button. This approach does that.

You might imagine, instead of using a collection, setting a flag on each individual tag (perhaps in its "edit wiki" interface) to designate its special status. I don't think we should do that; it's hard to keep tags in sync with each other one at a time, and it's important that the set be cohesive and consistent. People are more likely to notice errors if they're all listed in one place.

Could allowing the tag to be capitalized on display be a simpler option? That is, still case insensitively match tags when they are typed in, but display the capitalized Aliens.

This was actually suggested on MSO. Like you, we have a generic sounding tag (Processing) that actually refers to a specific thing. The proposal was that the color symbolize the difference between generic and specific tags.

Like I said then, it's a good idea, but it will be a huge amount of work, depending on which sites this is implemented on. For SO, and any of the other large sites, this is impractical to implement.

Not only are there an enormous amount of tags, there are an enormous number of tags that are very poorly defined. There is already plenty of arguments when retags are proposed, but that's usually only a handful of tags.

What you suggest will likely involve dozens, if not hundreds of changes to tag wikis on each site. Not to mention that there are plenty of umbrella tags that are used in both contexts. Many tags have no wiki whatsoever.

There's also a lot of work that this would mean for the developers. I expect that we all realized that someone will need to design and program this feature.

The design is an important thing to think about. Not only is color highly cultural, there is no real color tied to ideas. Many sites cater to a diverse audience, so it's an important thing to consider. Also, how will you pick a color without upsetting all the people who paid for tag icons? Changing the color of the non-generic tags runs the risk of clashing with icons like that.

Currently, the Processing tag isn't abused at all on SO. A single user (the OP of that question I linked) single handedly keeps the tag clean. And SO has the most users of any site here, with plenty of users that just throw tags around.

The easiest solution is to just retag the questions yourself, and maintain it. Do the experienced members at least realize how to use the tag?

I would not get your hopes up and expect the new users to realize what tags mean, regardless of what color they may be.

I realize that this probably isn't what you want to hear, but I'm just trying to describe the reality of the situation, as I see it.

116
Capitalize "possible" in the automatically inserted comments when you vote to close as a dupe
22
Should we make country tags visually distinct?
19
Is there any reason why tags are lower-cased?
13
Allow custom colorization of tags

995
Show all of my question/answers to me even if they are deleted
202
Can we allow 7.5K users to suggest tag synonyms without a score of 5 in the tag?
260
A real solution to ambiguous tags
1256
Don't throw away all votes when a user is deleted
250
The homework tag is now officially deprecated
317
Build and strengthen the Stack Exchange community with "crossover questions" between sites
257
Increase close vote weight for gold tag badge holders
113
Request for a possibility to adjust the spacing between lines