When I navigate to the Activity tab of my Stack Overflow user profile, one of the dashboard items is something called Impact, which is supposed to be an estimate of the total number of people reached by my activity: 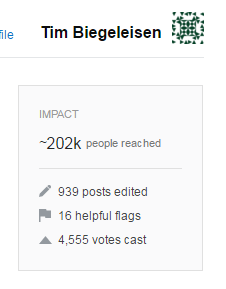 I was wondering if there are any plans in the works to add a feature which would show the trend of impact over time? It would be interesting to see if the rate of impact either increases or decreases over time.

I'm not sure a graph for this would be useful in any way, since you can lose impact if an answer no longer meets certain criteria and since the stat itself isn't very accurate.

If your answer stops qualifying on a popular question, you can lose thousands of "people reached" in your stat. That could make for a bit of a confusing graph. Indeed, the phenomena of losing "people reached" has already spawned multiple meta questions.

The "people reached" stat is a bit of a "fun to know" stat and is in no way accurate to begin with. Trying to figure out your impact over time with a graph of the changes to this stat won't do you much good, since if you post an answer to an old question with several thousands of views and it meets the criteria, your "people reached" will immediately jump by the amount of views on the question from before you even posted your answer. So for one period of time, it could look like you reached thousands of people when in actuality only a handful have so much a seen your answer, let alone have been helped by it.

Before you suggest only counting views that come in after you post an answer, there's currently no mechanism for that. Views aren't given a timestamp currently, so there'd have to be system changes somewhere in the database. On top of that, how can you guarantee that the person who viewed the page did view your answer? Even if they scroll down to it, they might not read it, and therefore might not be helped by it.

A more accurate (though still not perfect) way to figure out your impact would be to look at your answer scores. Upvotes on those generally mean people liked your post, found it useful, or were helped by it. You can see a bit of the upvotes over time by looking at the timeline of your answer, though I don't know of a way to look at all your answers at once and make a "graph" of it without grabbing all the data manually.*

Now I'm not saying making this graph wouldn't be possible by any means- I'm sure if SE wanted to they could make this happen. I'm more saying that even if SE did put the development time into it, it would be a kind of pointless graph given the inaccuracy and inconsistency of the stat. I personally think there's more important, and useful, things for them to spend development time on.

* I don't know if this information is available in the API or in the SEDE. If it's in either of those, that would make things a lot easier.

Not the answer you're looking for? Browse other questions tagged feature-request people-reached .

24
What happened to the other people? My Impact (people reached) just dropped
13
Is there a possibility of seeing a graph of a question's views over time?

26
Can we get tag voting stats in per-user overview form?
59
Add a "voted to close" activity event somewhere on the user profile page
417
Decision on rejected edits should be displayed as a notification to the editor
289
Let's stop displaying a user's accept rate
305
We're working on a new stat to help convey the reach of your posts here