How to find the actual close reason for a question?

Now my question is: How do I figure out the close reason that is listed on the question? In the example question it is listed as "put on hold as off-topic by Jamal♦ 19 hours ago" and the mentioning of "Unclear what you're asking" is completely gone.

Check the post's timeline, it has two close reasons because it's been closed twice.

It was first closed as unclear what you're asking then reopened and closed again as off-topic all by Jamal who as a site moderator can do that singlehandedly.

When a question got 5 close votes it ist closed and the reason is shown below, but as long as there are not enough votes, you can savely use the close link. It will display a list of reasons first, why you "want" to close it too. You don't have to choose, but you see the pending reasons as a small number beneath each option. 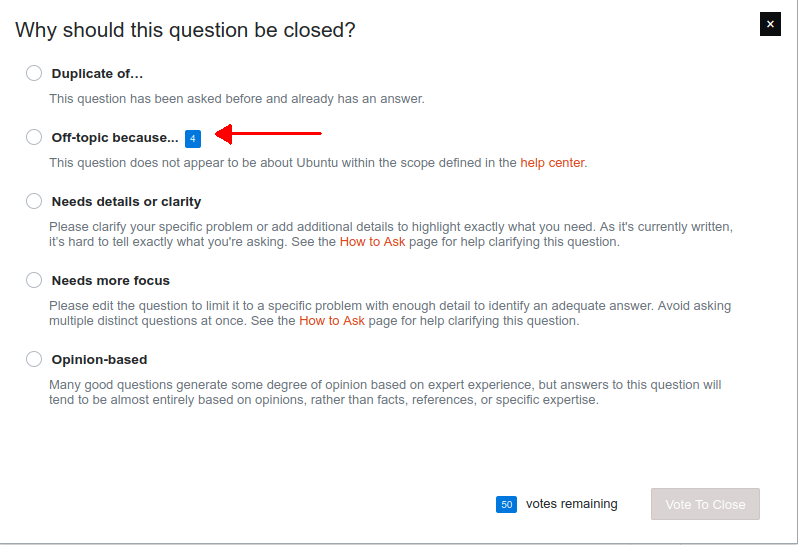 share|improve this answer
answered Jan 5 at 0:50

309
Database schema documentation for the public data dump and SEDE
678
How do I get attention for one of my own questions without a good answer?
544
How does the bounty system work?
755
What are the badges I can earn on each site, and what are the exact criteria for earning each badge?
250
The homework tag is now officially deprecated
3
Should this weird question be closed, and for what reason?
6
What is the proper close reason for developer center (Store) based questions
17
How to determine why a question was closed from the data dump/data explorer
12
How can we write a query in data.stackexchange to find the CloseAsOffTopicReasonType for a closed question?