Excavator and Marshal badges are being awarded over and over

The excavator has been awarded to... many users just some time ago. What a... bug? Certainly it is, too many unavailable posts :D

Seems to affect Marshal and Excavator. 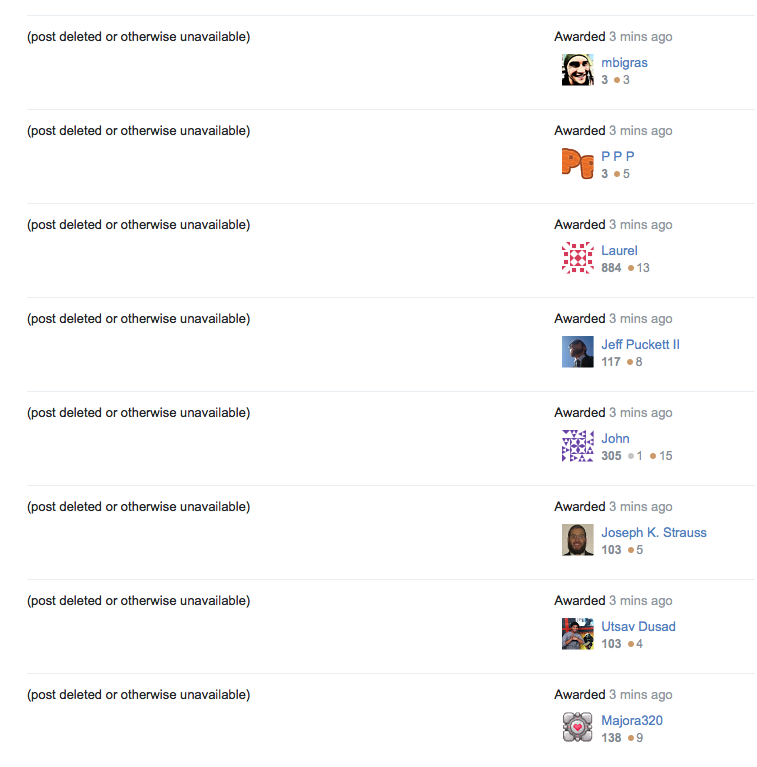 Also looks like it's everywhere. SO's got a similar problem a couple of minutes before.

Moreover, I can has THREE X marshals!!!

We just did a major revamp of how badges are awarded behind the scenes to drastically reduce the load on SQL Server. It now takes advantage of some pre-compute work we're doing to track badge progress in the profile.

However, I screwed up 2 queries, specifically the text names of the badges that prevent duplicate awarding. I was thinking to myself earlier "hey, maybe we should pass these in" as part of the rewrite - but it's not quite so simple. I'll take another look at this soon but when we're not fighting fires from a SQL Server upgrade. The cardinality changes which hosed some of the bigger badge queries needed urgent attention here, which ended up as a major revamp and introduced the 2 errors reported here.

Apologies for all the bad grants here - that certainly wasn't the intention. Due to how badges get tested, it's also not a symptom that shows up locally. If I can change this to a param exclusion passed by the code then things like this become far less likely to happen going forward.

I have cleaned up all achievements and grants associated with the bad code. User badge counts (on user cards and flair) will sync up tonight as part of a regular process.

Edit: If you're wondering why I had to address this quickly on the SQL Server front, here's the effect it was having and you can guess when the fix went out:

Not the answer you're looking for? Browse other questions tagged bug status-completed badges .

20
Extra number of gold badges appearing in profile
3
Recent activity list error
820
What are the badges I can earn on each site, and what are the exact criteria for earning each badge?
41
Badge Notification Repeats
-17
Tiny profile icons in comments

6
New badge notifications targets wrong post for "Nice Answer"
820
What are the badges I can earn on each site, and what are the exact criteria for earning each badge?
87
Vox Populi, Civic Duty, and Electorate badges being awarded en masse
10
Infinite amount of flags
173
Asking days badges
40
Tag badges are being awarded incorrectly
580
We're switching to CommonMark
31
Steward badges being re-awarded suddenly?