I have encountered an interesting situation with topology tag on MathOverflow. It currently says "2 questions tagged topology" and only one question was displayed. (See the screenshot below.)

On the other hand in the list of tags and in the tag-info shown when you hover over the tag, it is correctly shown that there is only one question. (Again, screenshot is shown below.)

When this was pointed out on meta.MO, one user suggested this explanation in a comment: "You can see the other question in the RSS feed for the tag. It got some downvotes and was removed by the author, but not before being included in the feed, which is what gets counted." Indeed, when I checked the RSS feed, I was indeed able to find another question there. It seems to be deleted - so the previous link will work for users with 10k+ on that particular site - but at the moment the question can be still seen in the Google cache.

(In this particular case, the complete removal of the tag is being discussed on the per-site-meta. So it is possible that we will not be able to check whether it was indeed corrected. However, it seems that it is not too easy to find a similar situation - a tag which has relatively few questions, so that they can be counted manually, and also has some recently deleted questions.)

Screenshot showing all questions tagged topology - together with the incorrect number. 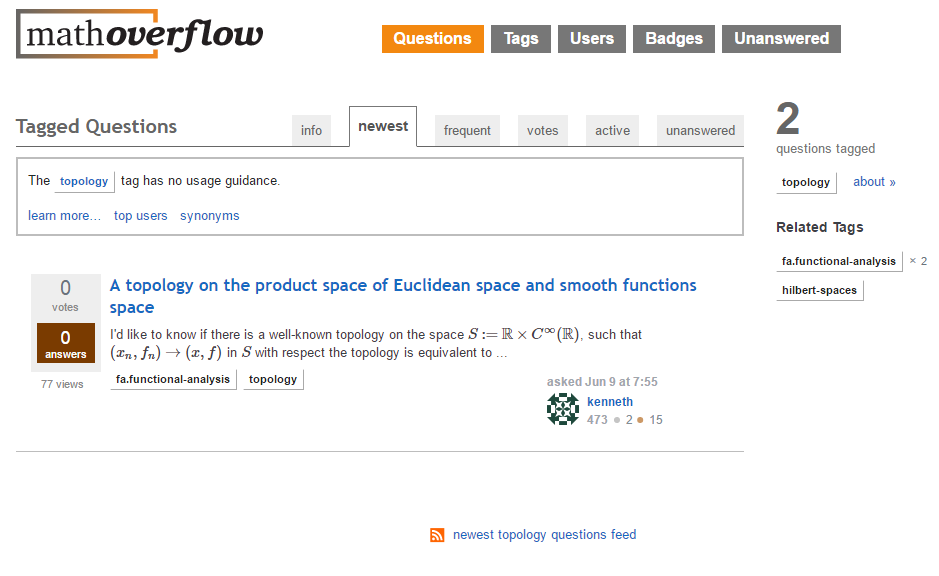 Screenshot showing the tag info and list of tags - where the number of question is correct.

EDIT: A few hours later the same page correctly displays 1 question. It was confirmed by 10k+ user that the deleted question has not been retagged. So I guess that the most likely explanation is to blame caching.

The list of questions is cached and doesn't update immediately when things get deleted, moved around, or asked. However, we don't want to display deleted questions to users so, when showing the list to you, the system does a quick check on all the questions cached for that page and, if deleted, doesn't show that particular question in the list. This doesn't update the number at the right, nor does it fill in the empty space (if applicable). So if you were viewing page 1 at 50 posts per page, and it contained a now-deleted post, you would only see 49 results on that page because one got hidden.

Eventually when that particular cache refreshes, the deleted post will no longer be a part of the cache and everything will update properly, including the number at the right.

Not the answer you're looking for? Browse other questions tagged support tags deleted-questions feed caching .

989
Show all of my question/answers to me even if they are deleted
152
Could the tagging system be enhanced to support tag synonyms?
191
RSS feed of your favorite tags
501
How does deleting work? What can cause a post to be deleted, and what does that actually mean? What are the criteria for deletion?
7
Any way to get an RSS feed of 'newest' tagged questions?
820
What are the badges I can earn on each site, and what are the exact criteria for earning each badge?
250
The homework tag is now officially deprecated
100
What other hidden or inobvious RSS feeds are available on Stack Exchange and its sites?
10
Zero questions shown in tag with two hyphens in its name