Reply icon is not showing for comment in Android app

As mentioned in this answer, when tapping a comment in the Android app, we should have a reply icon, letting us reply to the comment, instead of the auto complete on the site: 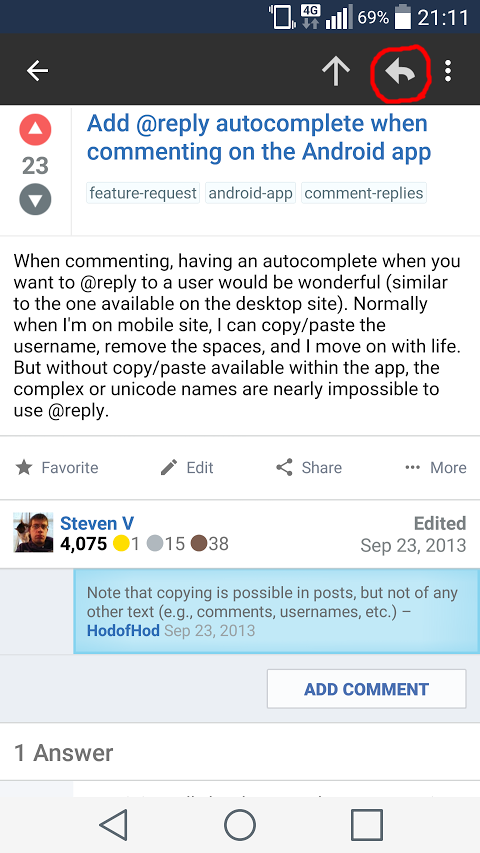 However, when I tap a comment I get the "flag" icon instead of reply icon: 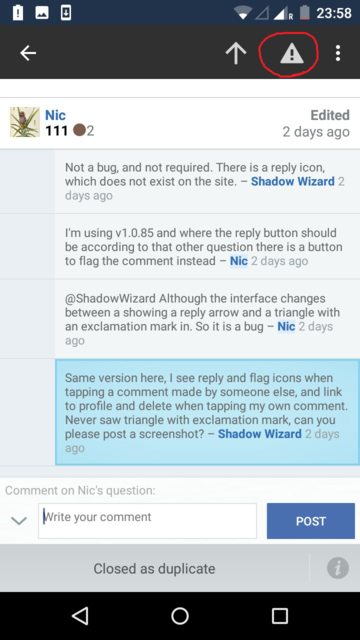 What is going on? Can this please be fixed?

Per the release notes:

When the commenting UI is visible, the post which you are commenting on doesn't show the "Add Comment" button, since you're already commenting on it. You can see this in the second screenshot in the question vs the first one.

As of version 1.0.94, we use a can_add_comment variable and a is_mid_commenting variable, which lets us hide the "Add Comment" button separately from showing/hiding the Reply button.

It's not perfect, because you can keep on hitting Reply on the same comment over and over again and each time it'll add the @Username to the front of your pending comment, but it makes a whole lot more sense than what was happening before.

Not the answer you're looking for? Browse other questions tagged bug status-completed comments android-app .

1
I am not getting reply button for comments. I get only copytext, share and the user buttons. I have a 290 reputation
23
Add @reply autocomplete when commenting on the Android app
2
Cannot reply to comments

335
Don't remove the @ part of my comment
343
Why do I need 50 reputation to comment? What can I do instead?
3
Tapping a comment from a deleted user is reliably crashing the app
364
New three-tiered badge idea: Explainer →Refiner → Illuminator
9
No confirmation pop up when deleting comments (Android app)
582
We're switching to CommonMark