Can we add more information to “no longer needed” flags?

As a moderator on a couple comment-heavy sites, I see a lot of "no longer needed" comment flags. But that doesn't tell me why it's no longer needed, so to evaluate it I usually have to read through a bunch of other comments or review edits to try to figure out what the flagger had in mind. But the flagger already knows why it's obsolete -- if only he could tell me, without ignoring the built-in flag reason and resorting to an "other" flag.

Could we add one more mouse click to "no longer needed" flags? Maybe something like this, after a user flags as obsolete: 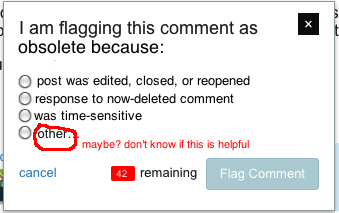 The first two options cover the vast majority of such flags I see, though other sites might be different. I don't know if the third happens enough to be worth the menu space. I sometimes see such flags on comments that are just plain old -- "@user ^^^" to get someone's attention, comments like "I'll edit in sources tomorrow" (and it didn't happen), etc. That's the sort I had in mind with this option.

After posting this I was reminded that I'd previously asked another question arising from the same problem. In that feature request I asked that flaggers be identified, and the response was that that wouldn't help all that much. This is asking about allowing the flagger to directly communicate the reason rather than leaving it to mods to figure out. Can we do something to add information to the obsolete flag?

252
Let's Plan the Second Iteration of the Stack Exchange Quality Project!
88
Updated comment flagging - Supporting the new Code of Conduct
118
Make comment flags less stupid
102
Drop “not constructive”, combine “noisy”, reword “rude” and “other” comment flags
34
C'mon, please give us a hint: how authoritative is that “obsolete comment” flag?
22
Allow extra details for standard flag types
22
When should the “Too chatty” flag for comments be used?
27
When flagging a post or comment, provide a freeform text entry field for all reasons, not just “other”
-1
Insta-delete obsolete comment if I was the one @replied

1177
Encouraging people to explain downvotes
218
Allow flagging a comment after upvoting it
167
Add escalation system to chat flags
504
Implement ```-style (fenced) Markdown code blocks
297
Add optional box for spam flags letting you say why you think it's spam
118
Make comment flags less stupid
102
Drop “not constructive”, combine “noisy”, reword “rude” and “other” comment flags
26
New “no longer needed” flag reason title is incorrect
2
Why was the display of prior “no longer needed” comment flags retroactively changed to “not relevant” in my flag history?