As a moderator, I occasionally experience addressees reacting to moderator messages in a weird manner or completely ignoring them. To develop a better understanding for the situation, I would therefore like to know what it is like to receive a moderator message:

(I know that I could probably have a fellow moderator sent a message to me to gain the experience myself, but since this of interest for most moderators, I consider it better to have a general reference.)

I have the advantage of having been on both ends of mod messages, so I should be able to answer this sufficiently.

As Mithrandir said, the message appears in your inbox (titled "moderator message", I believe, and the text is the start of the message). Clicking that notification takes you to exactly the same page moderators see (/users/message/<id>), except without the moderator guidance. There is a text box you can type a reply into, though this disappears once you've sent your one reply until a mod sends you another.

You also receive the message as an email with the subject "Re: <sitename>: message from moderators re account <username>", as is indicated in the mod tools.

It appears as a message in your global inbox.

(the blacked out part is the mod's name)

Then it took me to a separate page where it showed me the message and allowed me to reply. (But only once.)

Update: now the mod's name is anonymous. It shows as 'from moderators': 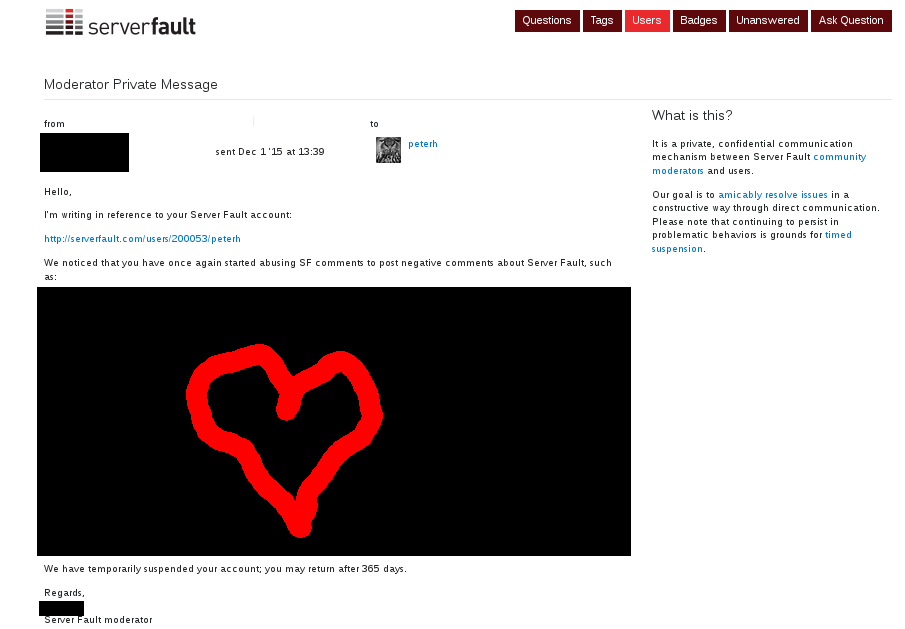 The psychological pressure is the highest possible in this context, because it doesn't happen without cause. Practically, if a mod writes anything, it is possible that it is only a warning, but it is always about suspension.

The user has only a single answering possibility, and he is warned for that. If effectively means for him that what he says doesn't matter, it will be probably rejected. He also has many reasons to suspect that the possibility to "appeal" to the SE is only theoretical.

Thus, if he doesn't react, or reacts some impolitely, he knows that anything he does won't make his case better, and also not worsen it.

It is also possible that he thinks you are right, but he won't admit it.

Such communications are probably preserved until eternity and regularly re-visited in case of the possibility of a new suspension. Mods and higher entities can probably see all of them, simple users can only see theirs. But regular users can't see the links again after they were removed from their inbox (it is similar to how it is with deleted posts - theoretically you can see them, but if you didn't save their links, you can't find them).

In most cases, the mods try to communicate the cage decision in a relatively cooperative way, and I think many users can think that you also have to fulfill contradicting requirements. The treatment of the SE mods is much better than on most other sites. But these words are also threatening with suspension, and the user - particularly in the case of the longer ones - can consider them unjustified (related example).

4
Are there specific guidelines for suspensions for rude and/or offensive content?
33
How come it is showing Diamond to my account in moderator private message?
-10
Could we extend the consequences of rude comments to the network level?
3
How does one find the reason for one's own account suspension?

517
How does deleting work? What can cause a post to be deleted, and what does that actually mean? What are the criteria for deletion?
842
What does "user was removed" mean and why did my reputation change because of it?
572
What is serial voting and how does it affect me?
233
What does the helpful flag mean?
691
What is the association bonus, and how does it work?
607
What is syntax highlighting and how does it work?
53
Allow moderators to add their own mod message templates
83
New Review Suspensions Mod UX