Do the posts deleted by an ex-mod become undeletable? [duplicate]

As we know, 10k+ users can see deleted posts and vote for their undeletion. And, anybody can see his own deleted posts, and over some reputation (s)he also have a vote to un-delete it.

Except posts deleted by a diamond moderator. They can be undeleted only by a mod:

I have a purely theoretical question from pure curiosity.

What happens, if the deleting mod is later de-modded? Will the posts (s)he deleted become undeletable again?

P.s. the possible dupe is about the other direction (essentially: do the posts deleted by mod before he got the diamond is made un-undeletable retroactively). Although probably both depend on the same - missing or existing - feature of the SE software,

On these reasons, I don't think the other question would be an answer.

Next to these: The answers there contain only opinions, which are agreeable probably for everybody, but don't contain real information about this possibility.

Here's a question where this is demonstrated. It was closed by a mod, then years later deleted by a mod. Neither are mods now, but I'm able to cast reopen and undelete votes. 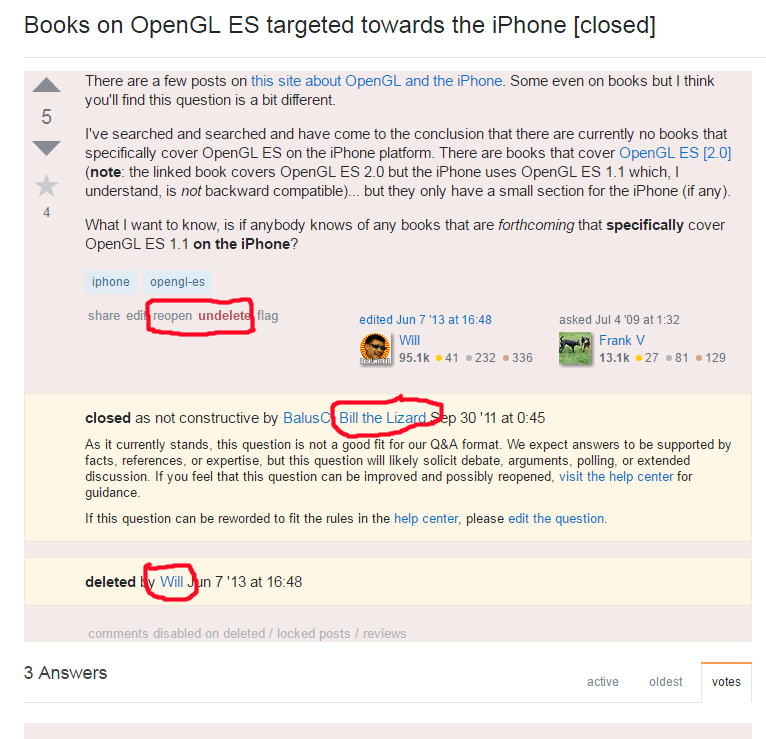 It's obvious that this is how the system works - the bindingness of votes is determined when the question or answer is displayed, and not some intrinsic vote type.

This won't reopen or undelete questions, though, even though they normally require 5 votes to close, for instance. The status of the question remains the same, but the actions available to other users in reversing moderator decisions is changed.

None of the questions posed above provide insight as to why Stack Exchange has chosen this method. It's possible it's simply due to the way moderator powers were an extension of reputation powers, which are checked each time, and since a reduction in reputation reduces powers then it would follow that the same happens to moderators.

However I don't think that's necessarily a good design - it may simply be an accident of development inertia.

Alas, no one from Stack Exchange has chimed in so we don't really know if this is by design, or simply how it was implemented at the time and never revisited once moderators started resigning.

Not the answer you're looking for? Browse other questions tagged discussion deleted-questions deleted-answers moderators moderator-abilities .

153
Delete votes from users who later become moderators shouldn't prevent community undeletion
149
Question title that doesn't describe the problem
-155
Don't close questions where the user has requested that it not be closed
12
Can a user undelete an answer that was deleted by a moderator?

963
Show all of my question/answers to me even if they are deleted
1072
Should 'Hi', 'thanks', taglines, and salutations be removed from posts?
500
How does deleting work? What can cause a post to be deleted, and what does that actually mean? What are the criteria for deletion?
1467
Fastest Gun in the West Problem
1808
What is the XY problem?
34
Allow 20k users to see deleted posts from other users profiles (particularly for post banned users)
75
Regular users should be able to vote to undelete moderator-deleted posts
9
Does temporary suspension remove mod powers?
2460
Firing mods and forced relicensing: is Stack Exchange still interested in cooperating with the community?