How can we improve blog promotion?

Some SE sites have SE-hosted blogs, and new posts on those blogs are automatically (via RSS) promoted on the front page like this: 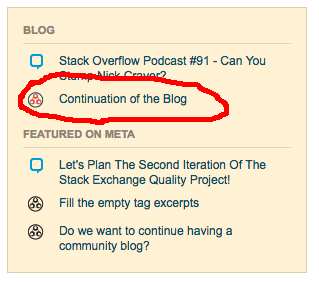 When Worldbuilding requested an SE blog we were advised to roll our own, which we did. (I understand that others have received this advice since then, too.) But, because it's not an SE blog, we have no easy, automated way to promote new posts on the front page like SF&F. Further, SE-hosted blogs are going away soon, so other sites that want -- or already have -- blogs will be in the same boat. (That's why this question is on Meta.SE rather than our own meta.)

What we're doing right now is to manually update a meta post when a new blog post is published, and then manually creating a community event to link to that meta post, which gets us this: 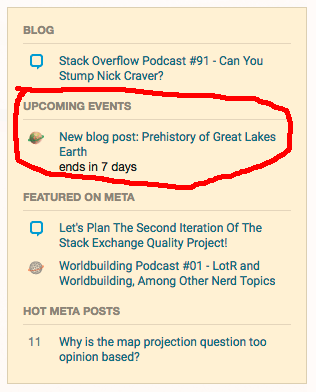 (We've just started this.) That's...ok, but every modern blogging platform has an RSS feed just sitting there to be used, and using an event to point to a meta post to point to a blog post is a little kludgy.

But I recognize that SE doesn't want to endorse any random thing on the Internet, and by putting a link in an official-looking section of an SE site, they run the risk of looking bad if something inappropriate shows up in a site's blog. Who knows who has editorial control? Where's the audit trail? When a CM notices something bad at 3AM on a Saturday night, what's the remedy? This is one of the main reasons that Allow non-SE URLs in Community Events was declined.

How can we allow sites' quasi-official blogs to have this kind of promotion while protecting SE's interests?

Followup proposal to put all the governance in public and protect both SE's and the community's interests. This addresses a question about putting a "blog" link in the supercollider, but the same considerations apply for publishing posts in the community bulletin.

There are probably a bunch of little problems to be solved here - heck, RSS has always been something of a mess of a spec, so even "it should be easy technically" is a bit of optimism there. But in my mind, the one big problem to be solved here is...

Find a way to put all of the governance in public.

And I don't mean in a chatroom, or off-site somewhere, or tucked away in emails sent to employees; I mean front and center on the site itself, visibly cross-linked with anything that someone might see upon clicking through the bulletin.

This isn't about giving employees like myself power over the blog; we could always just turn off the feed if we don't like it for some reason... That's not how we do things around here: these sites are community-moderated, and anything that gets attached "officially" to the sites themselves have to be run the same way. This was always a weakness of the WordPress-based blogging system, IMHO: because the privilege systems weren't integrated, it relied too heavily on a small group of blessed admins to make it work. Some sites figured out how to do this properly, open and in full view... Most did not, and withered as a result.

Not the answer you're looking for? Browse other questions tagged discussion blog .

193
We will no longer be hosting Blog Overflow
13
Link to blogs outside BlogOverflow in StackExchange menu?
10
Allow non-SE URLs in Community Events

606
Formatting Sandbox
189
Using the Stack engine for the blog – a long-term idea for maintaining a healthy blogging culture
2781
A Terms of Service update restricting companies that scrape your profile information without your permission
193
We will no longer be hosting Blog Overflow
2453
Firing mods and forced relicensing: is Stack Exchange still interested in cooperating with the community?
2155
Stack Overflow is doing me ongoing harm; it's time to fix it!
952
Firing Community Managers: Stack Exchange is not interested in cooperating with the community, is it?
550
The company’s commitment to rebuilding the relationship with you, our community
577
We're switching to CommonMark
729
New Feature: Table Support