On Graphic Design we currently have some handy tag-specific alerts when asking questions with certain tags. These are for certain problem questions that are only a good fit for the site if they follow certain requirements. The alerts list these guidelines and specific requirements.

These are also implemented on many other sites. They were requested on Science Fiction & Fantasy but apparently never implemented, leaving them to come up with alternatives. As far as I'm aware this is something that a developer needs to put in place on a case by case basis and isn't currently possible for mods to implement.

We plan to test a new, 'guided' version of the ask question page soon. This page would essentially break down all of the elements that make a great question, and give the user plenty of guidance as to why it's to their advantage to understand what's needed in each of them, and provide it.

Now, I don't know what this new 'guided' version of the ask question page is or what it looks like, but this should be a part of it. Tag specific requirements are an important part of asking competent and useful questions and these requirements are not obvious to new (or existing for that matter) users. 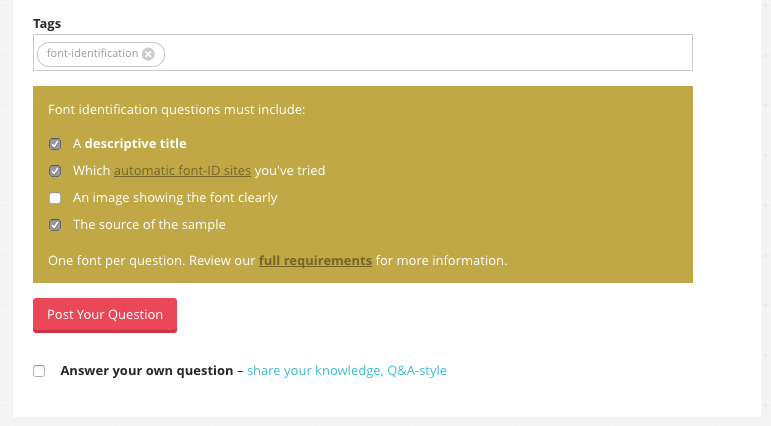 I'm not totally sold on my mockup, it's just a quick idea. Maybe the check boxes on each point are too much, I don't know—but there needs to be some interaction. Also note the lack of a dismiss button.

As for arguments that this makes it harder for new users to ask questions, I would argue that asking bad questions that are then closed because they didn't follow some obscure rules they weren't aware of is worse for user experience than the added (slight) extra hurdle to asking a good question to begin with.

251
Let's Plan the Second Iteration of the Stack Exchange Quality Project!
12
Remind people posting about [security] that vulnerabilities shouldn't be posted on Meta
36
Tag warning only shown for a second when I post directly after adding tags

834
Can we have the ability to retract a close vote before it closes?
916
Show all of my question/answers to me even if they are deleted
888
Why aren't people voting for questions?
1427
Fastest Gun in the West Problem
562
Exit strategies for “chameleon questions”
366
Send authors an inbox message if their question is closed
1174
Don't throw away all votes when a user is deleted
250
The homework tag is now officially deprecated
302
Moderators should be able to manually ban users from suggesting edits