When creating a code block in markdown with trailing line feeds, it displays correctly in edit mode, but after saving the edit I can briefly see it the same way, then the last line disappears.

This Python quine has a trailing new line. In edit mode, it displays, but not after that on https://codegolf.stackexchange.com/. It displays fine here, for some reason. Also, I'm fairly certain it used to work, as I've used blocks like these several times, but I just saw this bug today.

In case the post linked above is changed later, I took some screenshots: 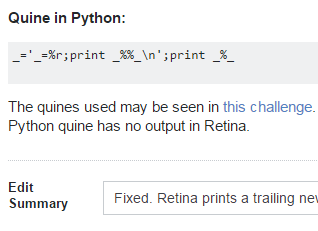