How do we stop users from using the "spam" flag when there is no "promotion of a product or service"?

"Spam" is defined right there in the flag popup as "Exists only to promote a product or service": 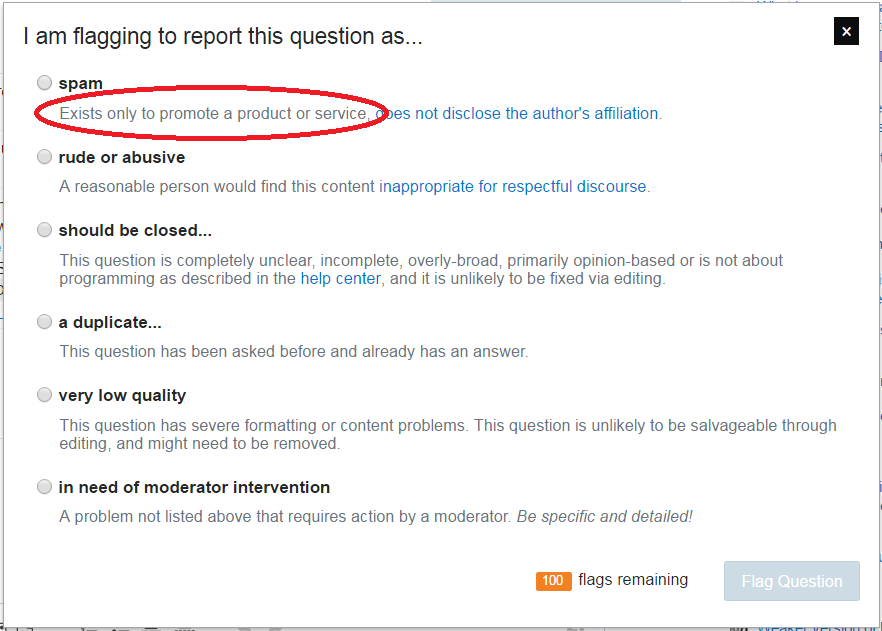 but most of the spam flags I process have no advertising, promotion etc. They are just VLQ, NAA, gibberish, etc.

In an effort to dissuade the spam flag's misuse, I decline incorrect spam flags with a "a moderator reviewed your flag but found no evidence to support it" message, or sometimes a custom message like "I see no advertising here". But it's a losing battle.

Can we add a field to the popup that asks the user to enter the url/name of the thing being advertised?

The idea being that if people are too lazy to read (as evidenced by the statistics), they are also too lazy to enter anything and so won't use the spam flag incorrectly.

It would also help speed the review process, making it faster to identify multiple spam posts from a user or about a product.

Admittedly, the amount of spam per day isn't that large, and perhaps this question should be tagged catharsis.

The moderator flag queue is biased towards bad spam flags.

Posts that are deleted by 6 spam flags from the community have their flags marked helpful. This removes the flags from the moderator queue. (I've just tested that this is the case.)

That biases the queue towards unhelpful spam flags.

In reality, there are probably far more helpful spam flags than there are unhelpful spam flags, you're just not seeing them because they're removed from the moderator queue. Given that, I'm not sure it's necessary to do anything extra to spam flags - it would increase the amount users have to do to nuke actual spam because of a likely small proportion of bad flags.

I'm also not sure that requiring a reason would actually make people think - you'll just end up with lots of reasons that just say 'spam'.

Stack Exchange has very strict definition of spam. I am an experienced flagger with several thousands helpful flags cast over few years at multiple sites but even to me it took quite a bit of effort and messing on meta and in Charcoal HQ to realise how strict it is.

(I am not happy with that but oh well. I guess it will be that way no matter how I feel.)

From what you describe it looks like many flaggers feel like I do. And based on my experience I can tell that this is unlikely to stop, you will keep getting this kind of troublesome spam flags no matter what.

And I can tell that most flaggers will be unhappy with your declines (I won't anymore but this is exception not a rule). Getting a bland "no evidence" decline for a blatant job ad or research survey that didn't qualify only because poster didn't add link to job site / survey service, give me a break. Give me a f#cking break!

Given above, I think that best we can do is just decrease tension. I think having a dedicated canned decline reason would help in that. (Canned because there are and there will be many flags of that kind.) Reason text could be something like that:

We are sorry but Stack Exchange has a very strict definition of spam and post you flagged doesn't qualify. Strict handling of spam flags is necessary to maintain our automated anti-spam system. In the future please use spam flags only on posts that strictly match criteria used at Stack Exchange.

To make things really convenient this decline dialog would also better have something like a checkbox "delete the flagged post". Because let's face it, vast majority of these posts are delete worthy even though they can't feed into anti-spam system.

I have to disagree vehemently with the proposal of requiring an additional reason.

Since I joined this site, I've accumulated over 645 helpful spam flags on SO alone, only 3 of those have been declined. I suspect most heavy users of the spam flag have very similar ratios.

The flag queue seems to show only an excerpt of spam flags (those that don't get deleted instantly via 6 flags / post) and is thus weighed towards the more controversial spam flags.

Adding an extra step to this process would just make it slower to flag spam, and it would also serve no purpose other then increasing the time it takes to flag something as spam.

A valid spam flag is very obvious. For anything that you can't identify as spam quickly, a moderator flag is more appropiate anyways. So in essence by requiring extra reasoning you are punishing everyone who casts valid spam flags for no reason other then to discourage some people who misuse them.

I think the reason you're seeing this could be because there seems to be a second internet definition of spam, and that is "posting a lot of not-useful stuff in a short amount of time" (example of a site that uses this definition).

One possible solution would be to have a dialogue when users have a decent number of declined spam flags, saying something like this:

"Spam" has a specific definition on {{site}}—consider other flags such as "Not an Answer", "Rude or Abusive", or "Very Low Quality" before flagging.

Remember: the text defining it is smaller and lower-contrast; you can definitely count on people not reading it and saying, "SPAM—that sounds like the flag that I'm looking for!"

What if we renamed the spam flag?

Users flag posts as spam because they think those posts are spam. They think "spam" is just another word for "junk." So instead of trying to convince them "that's not spam here," why don't we use a different name for unsolicited advertising?

First of all, some research might be needed in declined/helpful/auto-helpful spam-flags vs user's moderation experience (e.g. total flags, perhaps rep, etc). I am guessing that experienced users are less likely to get declined spam flags.

A new (or relatively new) user, will definitely not go through pages of SO policy, and will probably not bother much with the explanation below the word "spam":

spam
Exists only to promote a product or service, does not disclose the author's affiliation.

They will instead use their own definition of spam. Trying to educate them on spam's definition on SO would be ineffective for the reasons mentioned above, therefor we should remove completely the word from the flagging process:

Exists only to promote a product or service, does not disclose the author's affiliation.

Other short names should be kept though (perhaps some could be changed as well). It's much easier to have abbreviations for flags when discussing in Meta.

Additionally, the flagging layout could be changed:

Making spam flagging harder by demanding links is a bad idea as mentioned in other answers.

While I believe education is the best form of prevention, have we ever considered that maybe the spam flag is used somewhat as a "catch-all" (gibberish/VLQ/rants/etc.) flag by inexperienced users because it is the first flag on the list? IIRC, the point to the ordering as it exists today is to make it as easy to find the spam flag as possible, but possibly that is part of the problem since it is so easy to find, and the term "spam" is misleading to users unfamiliar with the specfic defintion on Stack Exchange sites.

You would have to test this with some A/B testing, but what about reordering the flag window? Move Spam to the middle somewhere, put Offensive above it, and possibly even the close flag buttons above it. Users may use it less because they find a more fitting one first. 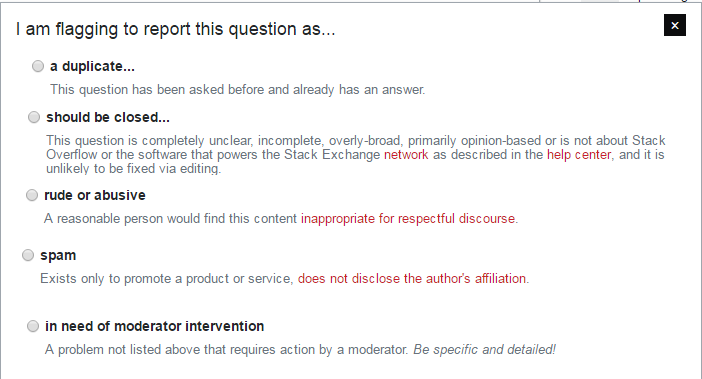 After the A/B testing, you could then look into whether or not:

If spam flagging did not suffer, with mod rejected spam flags (and aged away spam flags) decreasing, you could probably try this for an extended period.

Not the answer you're looking for? Browse other questions tagged discussion feature-request flags declined-flags spam .

422
Can a machine be taught to flag spam automatically?
39
What’s (not) spam?

305
What are the “spam” and “rude or abusive” (offensive) flags, and how do they work?
23
Is "useful" Spam allowed?
19
My Spam flag was declined... What's the tipping point for spam?
43
Join the crusade against router-switch.com Content Spam
130
Let's get rid of the 10K flag queue
14
Modification to the 'excessive self-promotion' moderator private message
20
Is an off-topic political message inherently rude or abusive?