How to flag comments as spam?

When I try to flag a comment, I am offered the following possibilities. 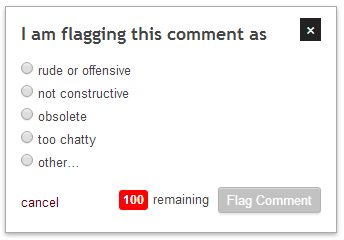 Which of them should I choose in situation when a comment contains something which would qualify as spam, i.e., post containing the same content would be flagged as spam?

Admittedly, typically the spammers do not have enough reputation to post comments in other places than under their posts. (Which is the situation I saw a while ago and it prompted me to ask this.) In the specific situation, that I have already flagged the post, there is no need to do about the comment right?

I assume that the situation that a spammer would have enough rep to post comments anywhere is probably very rare (if it happenst at all). Still I would like to know also what to do in such situation.

You allude to it already yourself: since commenting on any question or answer that is not your own requires 50 reputation, it's unlikely that a spammer will

So given that spam comments happen so infrequently, the already-available "other" option is probably sufficient.

Not the answer you're looking for? Browse other questions tagged support comments flags spam comment-flags .

3
What to do with spam comments
299
What are the “spam” and “rude or abusive” (offensive) flags, and how do they work?

709
How do I get attention for one of my own questions without a good answer?
196
How do comments work?
218
Allow flagging a comment after upvoting it
153
A guide to moderating comments
298
Add optional box for spam flags letting you say why you think it's spam
2779
A Terms of Service update restricting companies that scrape your profile information without your permission
417
Can a machine be taught to flag spam automatically?
169
A machine can flag spam automatically. Can it do better?
265
Let's hold language in comments to the same standard as posts