How to handle repeat voting fraudster who re-serial-votes after every reversal?

I couldn't find a Meta post on what to do when a user keeps reapplying their revenge serial votes no matter how many times it is reversed, so I'm asking this question.

So recently I had an interaction with a user, who was accusing another user of "personally attacking" them in the comments on their answer, over some feedback they left pointing out some flaws in their answer. Seeing this I left a comment explaining to them that critiquing their answer is not a "personal attack", which it simply isn't. Shortly there after this user apparently had a meltdown, and started lashing out with actual personal attacks and revenge down votes against at-least one of the involved users, me.

They down voted all 3 of my answer on this SE site in the space of about a minute, leaving a nonsensical "this answer is worthless" comment on one of them (had I had more more posts on the site, I'm sure they would have continued).

Unfortunately, the automatic script did not detect it for some reason, so I used the contact page to request a review into this abuse, mainly because I hate to see this kind of abuse degrading the quality of SE.

Anyhow, I got the canned response in unrendered markdown about 2 weeks later telling me a developer would investigate the situation, and shortly there after the fraudulent votes were reversed... To which this unsavory individual responded by immediately reapplying the same fraudulent votes as soon as they noticed just under 3 hours later.

Following the instructions in the email on if the behavior continued, I replied to the email to say that the abuse had continued. And you guessed it, the same thing happened again! Clearly this person has some personal vendetta and doesn't mind abusing the Stack Exchange system to enact it.

This time the automatic script got wise to their abuse though, and automatically reversed it.

But the story doesn't end there.

Apparently this user really wants to have their revenge almost 3 weeks later, and apparently realizing they can no longer beat the system so easily, they start spacing their votes out by a couple of days. So the day after it was reversed once again, they start doing just that. 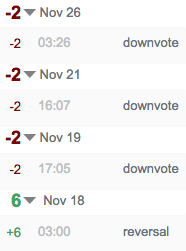 NOTE: I realize that correlation does not imply causation, and that theoretically there could be some other users who happen to be looking at my older content and just happen to all decide to down vote while never happening to find the same post, but I think this is what XKCD means by:

Correlation doesn't imply causation, but it does waggle its eyebrows suggestively and gesture furtively while mouthing 'look over there'.

So, after 3 confirmed cases of voting fraud doubtlessly by the same user, and what is almost-certainly a fourth case where they got semi-clever, I have little doubt they won't just do it again. I don't really even mind the loss of 6 paltry unicorn points, it this type of abuse in general that bugs me.

So what should someone do in this situation?

A couple of things here.

As in completely. It was great for the problem we solved when we created it, but it doesn't work at scale. Way too much human time goes into doing what smarter algorithms could be doing.

We're about 2/3 of the way there. Soon, mods won't need to go looking for this sort of stuff anymore. They'll just see reports of suspicious activity where the system couldn't make an automatic decision, and the mod will indicate if the votes should be invalidated or not.

You can post as you did here, or contact us and let us know that they've done it again, in a very deliberate manner after waiting just enough time to try and evade the scripts.

Since you posted, I just need to know what site, and I'll have a rather candid chat with the user involved.

This is a problem for the mods to handle. Flag either account (the suspected serial voting account or the suspected target account) for the site moderators' attention. Serial downvoting is 100% not okay and, though there are automatic tools to handle most cases, persistent serial downvoters need personal attention from the mods.

To flag a user, find any of their posts and use a custom flag on it, briefly providing the necessary information for the mods to pick up the investigation. A custom flag may seem too short, but not much more than the suspicion and the affected account is needed — it's not necessary to provide all the circumstantial evidence, since mods can see the same public reputation patterns, and have better tools than regular users do to determine if it's caused by targeted voting.

Using the Contact Us form will also work, but is overkill and less quick. Those messages bypass the mods and are handled by Stack Exchange paid staff directly, who have more powers than necessary for this problem, and have many more demands on their time. Since mods have the tools to fully handle this, you'll get a faster response by contacting the mods and they're more likely to personally notice if the problem continues.

You can give them a short time-out: one of our moderator message templates is named “revenge downvoting”, and says in part:

After reports of unusual voting patterns coming from your account, we found a lot of downvoting against specific users. Please note that these downvotes have been invalidated. … voting irregularities are something that we take very seriously and can result in a prolonged suspension for all involved.

A message with a short suspension will a) temporarily stop them from repeating their serial voting, b) send the message that this is unwelcome behaviour that can and will have negative consequences for their account, if continued.

If they continue undeterred, a few rounds of this will make their misbehaviour not anyone's problem anymore, because they'll have escalated themselves up to a long suspension. Letting the mod tools handle this puts the choice back in the user's hands, leaving it up to them to choose between self-destruction or changing their behaviour, with a minimum of wasted mod time better spent on pretty much anything else.

Not the answer you're looking for? Browse other questions tagged support voting serial-voting .

13
How can I tell if my votes have been reversed?

682
How do I get attention for one of my own questions without a good answer?
883
Why aren't people voting for questions?
806
The Many Memes of Meta
1170
Don't throw away all votes when a user is deleted
573
What is serial voting and how does it affect me?
124
The vote fraud script breaks legitimate polling questions - A serial downvoter's lament
2314
Firing mods and forced relicensing: is Stack Exchange still interested in cooperating with the community?
21
Serial down voting those who write serially bad answers
905
Firing Community Managers: Stack Exchange is not interested in cooperating with the community, is it?