I opened the app from a backgrounded state to see the achievements nav bar button in the wrong position. 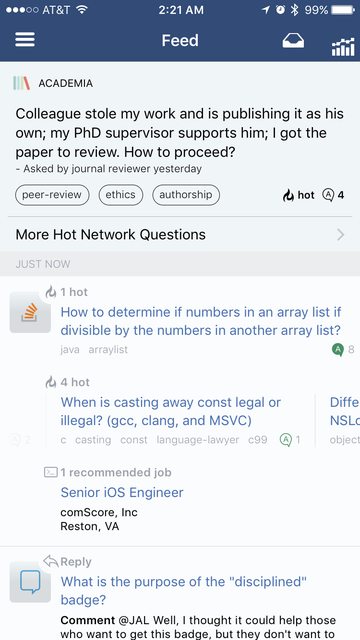 (Sorry, no freehand circle since I'm on mobile)

This could be an issue with the button itself (are you using a UIBarButtonItem with a custom view?), or a UIKit bug, since I can't reliably reproduce it.

So, this used to be a random occurrence and now it's happening a lot. It looks like the bug occurs when updating the UIBarButtonItem in viewWillDisappear:

I'm fixing this by 1. also clearing the achievements in viewDidAppear: so there's a high probability that no changes will occur in viewDidDisappear: and 2. Moving things to a custom view that has a fixed height so there's only one axis which things can be off on. Without the first fix, things look correct once popping has finished but buttons are in the wrong spot during the animation.

This is an iOS bug which we're probably hitting due to the weird way we do things.

When there are no achievements, the right navigation item looks like this:

When a rep change comes in (say +5), the following happens:

This causes the achievements bar button to be further right than it was with the image. The fact that the +5 label is also shorter causes it to be lower than the image would be as well.

I suspect that under certain conditions when transitioning from the custom view to the image, the navigation bar isn't getting properly laid out, causing the image's origin to be down and to the right of where it should be.

Since I can't reliably reproduce this, and I'm hesitant to throw extra setNeedsLayout calls onto a UINavigationBar to try to blindly fix this, I'm just gonna leave it alone for now.

Not the answer you're looking for? Browse other questions tagged bug status-completed design ios-app .

5
Inbox and achievement navigation bar buttons are too close together