29 “User was removed” events, in two batches. What's going on?

Today tens of upvotes where removed from the reputation list at top of the website. First I saw 12 "-10 User was removed" lines. In about an hour I saw more of these lines.

I know there are similar questions here and I'm not asking what does this mean.

I wonder why did it happen twice per hour. And is it possible to know what users exactly caused this? 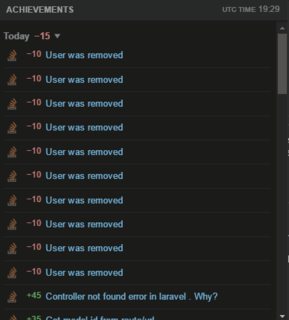 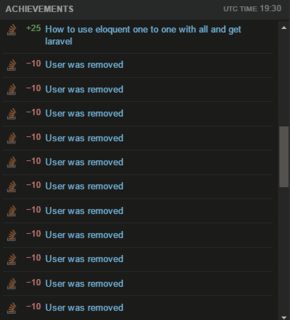 In my profile, there is only one "removed" event listed:

I'm responsible for this. Two users were each operating sock puppets that voted for themselves and that they used to cast extra votes for people they liked. I deleted those sock puppets, who had each cast over 50 votes, at two different times. Turns out the two users were actually the same person, too, so those accounts were merged and extra votes they cast invalidated at that time.

A percentage of the votes these various puppets had cast went to others, so there will be some collateral vote invalidation due to their removal. If it's any consolation, you had never really earned those votes in the first place, since they all were multiple votes cast by the same person. This simply brings things back to how they should be.

As an update to this, outside of Brad's answer:

We've corrected the achievements dialog so that it correctly aggregates "user was removed" and "serial voting was reversed" events into a single event, rather than displaying them all in a list like this. It should now match what is displayed in your reputation history*.

832
What does “user was removed” mean and why did my reputation change because of it?
80
What features did the Community Team discuss, have implemented, or have denied last month?