This question is related to Move questions between Stack Exchange sites but as I don't want to bring back a 7 years old topic for an improvement, allow me to make a new one.

We are all aware of newbies that don't get the SE concept of "one website by topic", and post everything on SO. No a big mistake, but probably one of the best ways to get a lot of down-vote and some more or less bad comments, until a good angel moderator moves the question to the correct site.

If you've got enough points to cast a flag Flagging > Closing > Off-Topic > Migration seems a good answer (even if I was not expecting Migration in the Closing section to be honest).

But I'm facing this choice : 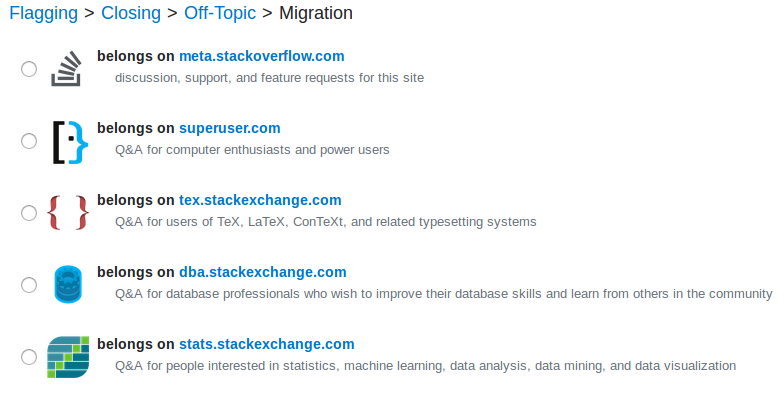 As you can guess, the vast majority of off-topic questions do not belong in one of these sites.

Adding a search field would be the best probably, like we have for Flagging > Closing > Duplicate

Other solutions could be:

Removing this part of the flagging board

As said in the comments :

I can understand this point of view : if the question don't belong to this site, we close it and ask the owner to make a new one on the good site.

Different answer but same problem : this tool is useless and should then just be removed, and the help center guidelines updated to something like "flag as off topic, or ask a moderator to move "

How does it work now?

One of the rules of migration is that, in order to be a candidate for migration, a question must be off-topic on the site it's posted. That's why custom close reasons such as:

I'm voting to close this question as off-topic because it belongs on [somesite.se]

Makes no sense: being on-topic elsewhere doesn't automagically make a question off-topic where it's asked - so if you're closing a question because it belongs elsewhere, you're Doing It Wrong™.

Truth is, migration is broken, pretty much by definition: if a question must be off-topic where it's posted, then it should be closed as such, with a valid close reason. But then, once it's closed, even a moderator can't migrate it; it has to be reopened and then migrated.

The single most important rule of migration being Don't Migrate Crap™, I have a number of problems with your proposal.

It sublimates the migration paths. [codereview.se] is witnessing poor recommendations pretty much every day, and that's without a SO-to-CR migration path. Migration paths are important: they're the reason you're only seeing very few sites to migrate to. They're quite literally a shield for smaller sites that would otherwise easily be drowned in bad migrated content, due to SO's size. Code Review gave a go for a CR-to-SO migration path, and refused SO-to-CR. Allowing free-for-all migrations can be quite reasonably expected to rapidly turn into an utter mess.

It makes it sort-of OK to ask questions that don't belong where they're asked. Each site has its well-defined scope, refined and matured with passing months and years; users are rightfully expected to read the links that are given to them when their question is closed: links to relevant meta topics, help center pages, and whatnot. If you're too selfish to be bothered to read the information that's there telling you exactly what is and isn't on-topic on the site you're on, then why should the community be bothered with your question? It should be outright closed, and your next off-topic post should be closed as well, and the one after, until you either block yourself from asking, or read the frakkin' links. If the off-topic question is reasonably on-topic elsewhere, then hey, why bother - just ask anywhere and the good folks in that community will migrate it where it belongs, right? No, not right.

But then again, this tool is useless and should just be removed, [...]

Agreed, the tool is more or less useless and should just be removed.

[...] the help center guidelines updated to something like "flag as off topic, or ask a moderator to move if already a good answer"

Off-topic questions should be closed [with a valid, existing close reason, not some made-up BS "belongs on site X" reason], period.

Migration? IMO should be only for exceptional cases where the question is a textbook-perfect candidate for the target site. And that doesn't happen very often. And the best people to know that are on the target site, not on the source one. So assuming migration is just a fact of life-on-SE we have to cope with, IMO the current situation where only a moderator can migrate to a site without a migration path, is perfectly fine: they have the power to decline the flags, or to enact them. And meanwhile the OP learns that their question is off-topic where it's posted, as comments and close votes pile up.

Not the answer you're looking for? Browse other questions tagged feature-request flags migration off-topic .

963
Show all of my question/answers to me even if they are deleted
256
Reset votes on migrated questions
1231
Don't throw away all votes when a user is deleted
301
Build and strengthen the Stack Exchange community with “crossover questions” between sites
435
Should Stack Exchange in general be awarding “A”s for Effort?
114
Add a “don't migrate crap” migration 'path' to all sites
298
Add optional box for spam flags letting you say why you think it's spam
182
A proposed philosophy of question migration
415
Can a machine be taught to flag spam automatically?